Whiteflies are small flying insects that feed on the sap of plants. They are not harmful to humans, but they are a major agricultural pest. In particular, the honeydew they produce can cause the spread of mould on the surface of the plant leaf.

What is a whitefly? 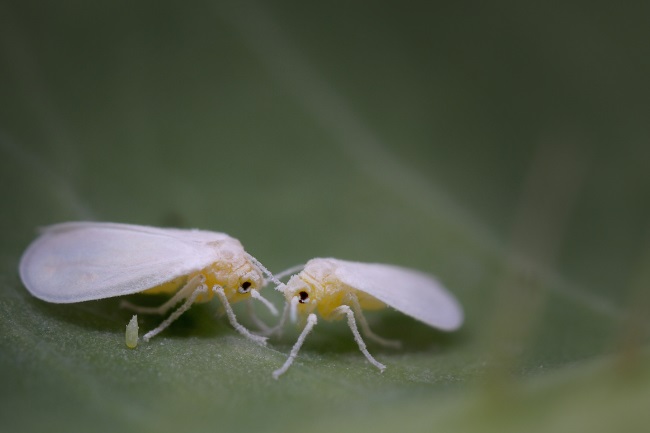 Somewhat confusingly, whiteflies are not actually flies, and they sometimes aren’t even white. Whiteflies are a type of insect that sit within the true bug family, like aphids and scale insects. Like their relatives, they feed on the sap of plants by poking their mouthparts into the xylem and drinking the fluids within.

As adults, whiteflies are relatively small, largely less than 2mm (0.08in) in length, and have two pairs of waxy wings positioned over their bodies in a triangular form. There are around 1,500 whitefly species globally. Some have patterned wings, and a few can even be black in colour, but the most well-known species are white, giving the group its name.

What is the lifecycle of a whitefly?

Whiteflies start life as an egg. The female lays these eggs on the underside of a leaf. The eggs are a yellowy-white colour and pointed at both ends. If the female has not been mated with when she lays these eggs, then they will all hatch to be male whiteflies. The females will then mate with her offspring to produce female eggs. A single female can lay around 400 eggs and will lay them in circular patterns.

As they mature, the eggs will slowly take on a darker colour, and they will hatch to produce a nymph, known as a crawler. The juvenile whiteflies are mainly flat and oval in shape. This nymph will go through four instars as it slowly develops towards being an adult, but it only has functioning legs in this first stage. The crawlers will make their way across the leaf before attaching their mouthparts to the leaf surface and beginning to feed.

As they then moult into the successive instars, they will remain attached to the plant by their mouth. In the final stage, the nymph develops into a pupa in order to transform into an adult. This pupa is oval and spikey. Once the whitefly has transformed it will burst out of the pupal case and pump up its wings to unfurl and dry them.

It can then start the whole cycle again. An adult will live for several months, feeding on sap as the nymphs have done.

Also read: How to Deal with Whiteflies on Plants? (Prevent Damage)

Are Whiteflies harmful to humans?

Whiteflies do not bite humans, as their mouthparts are designed to pierce plant matter rather than flesh. Mostly they will fly away if disturbed, and they are too small to be of interest to humans in a culinary manner. The main impact whiteflies have on humans is the damage they cause to agricultural crops and other decorative plants. 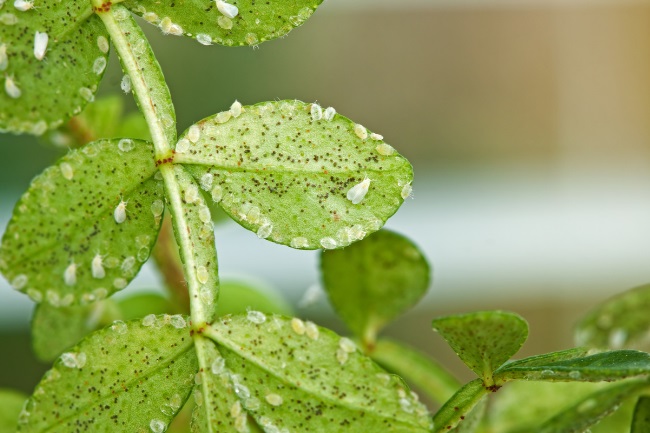 As both the adult and the nymphs feed on sap, they can weaken plants through this feeding process and the damage they do as they cut into the plant. However, in general, it’s less the action of feeding that affects plants but the fact that this process encourages the establishment of damaging moulds and causes the transmission of disease.

When the whitefly starts feeding, it secretes spit into the cut; this can introduce bacteria and moulds picked up from other plants. More harmful, however, is the excretion of honeydew by the adults and larvae, which they produce as a waste product from sap they consume. This sugary substance coats the leaves of the plant they are feeding on and causes the growth of mildews and other moulds. Many species, such as ants, actually feed on the honeydew as a source of sugars and nutrients.

Whiteflies are difficult to control and are even small enough to fit through mesh erected in greenhouses to keep out pests. Therefore, while they aren’t technically harmful to humans, they are an irritating pest to gardeners and farmers and can affect the production of our crops, which can impact the availability of food.

Are whiteflies harmful to pets?

Because they do not bite, whiteflies are not harmful to pets. Many pets may find small flying insects either alarming or intriguing, meaning they may hide away from them or try to investigate them, but these tiny flies are really just getting on with their day.

Because whiteflies are so hard to get rid of, many people turn to pesticides to control them. However, some pesticides can be harmful to pets. So while the whiteflies themselves are not harmful, the things we do to prevent them may be.

Whiteflies: An irritation, not a threat

Whiteflies are an incredibly irritating pest that causes a great deal of damage to commercial plants. However, they are also a great source of food for many animals, from ladybirds to damselflies, even to some bird species. While we may never be grateful to see them on our favourite plants or in our crop fields, at least they are not directly harmful to humans, meaning one less annoying biting insect when we’re out and about on an evening stroll.

How to Deal with Whiteflies on Plants? (Prevent Damage)
Next Post: What to do if You’re Stung by a Bee (& How to Get Sting Out)?