Most centipedes do not die in winter, as they can live up to six years. However, what they do in winter varies depending on the species and where they live. Some will remain active, while others with enter a type of hibernation known as diapause. 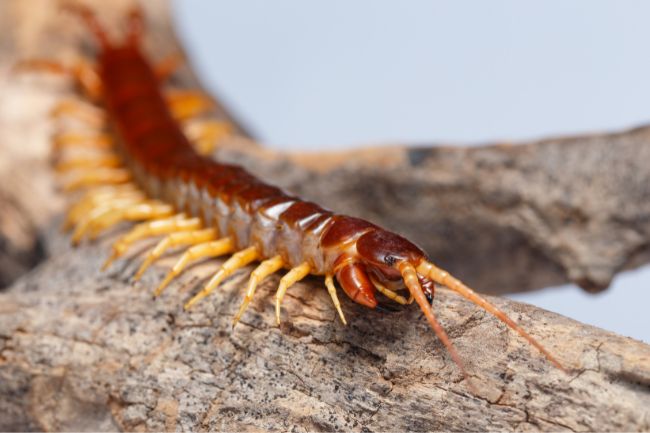 A centipede is a kind of arthropod, closely related to insects. Like insects, arthropods have a hard exoskeleton, made of chitin, the same material our fingernails are made from. Unlike insects, however, they have more than three pairs of legs.

Indeed, the name centipede comes from the idea that they have a hundred legs. This, however, is a bit of a misconception. There are roughly 3,000 centipede species in the world, and so far it seems none have exactly 100 legs. Instead, leg numbers can vary between 15 and 177 pairs.

Centipedes are also generally faster than millipedes, and often have flatter bodies. Both species like to live in dark and damp places. This is in part because they easily dehydrate, losing water quickly through holes in their exoskeleton called spiracles.

Centipedes live across much of the world, in a range of different habitats, from temperate forests to deserts to rainforests. Because of their adaptability, they are found across every continent aside from Antarctica.

What happens with them during winter?

Centipedes can live up to 6 years, an impressive age, though this depends on which species they are. Like insects, centipedes do not create their own heat, and are cold-blooded. This means they need external warmth, such as from the sun. If they do not have enough warmth they will find it hard to function, and eventually, they can die.

As centipedes live across many different kinds of habitats, what they do in winter varies massively. In some climates, there is no real winter, instead having wet seasons and dry seasons, with no truly cold episodes. In these kinds of habitats, such as in rainforests and deserts, centipedes can simply continue about their business all year long.

The exception to this might be if the habitat they live in experiences a very hot, dry period. As they require moisture to survive, this may be just as difficult to survive as extreme cold. During these periods, therefore, they may choose to become dormant, or enter into diapause. Diapause is similar to hibernation for mammals. It can help them survive extreme conditions through becoming less active and requiring less to eat.

Centipedes also live in temperate zones, however, and here temperatures in the winter can certainly get to uncomfortable levels for the centipede. Survival depends on finding a sheltered spot where there is enough warmth and moisture to sustain them throughout the warmer months.

Common spots for centipedes to spend their winter months can be under rocks, which store and release the heat from the sun, in compost heaps or under rotting wood. Rotting materials give off heat, which can create an environment warm enough to keep active in. If there is not enough warmth they may become dormant, entering diapause in order to survive.

Another option some centipede species utilise, is to find their way into human homes. Houses are generally kept at a fairly warm temperature throughout the winter, which allows the centipedes to remain active. While some people might not like the idea of these little creatures skittering around their houses, they do help out by cleaning up other insects and spiders.

The house centipede is one species that has now entirely adapted to live in human houses all year long. It is so well suited to this habitat that is will die if moved outside.

Also read: Centipedes’ Eyes: How Many, How Do They Use Them & More!

Centipedes cannot function if they become too cold, and therefore it can confidently be said they dislike cold conditions. In order to remain active, they seek out warmth. However, they also cannot cope with dryness, as they can quickly dry out and die. Their ideal habitat would be warm and moist, which is perhaps why some of our biggest centipede species are tropical, living in warm and wet habitats such as the rainforest.

Yet, wherever they live, centipedes have found a way to adapt to the conditions. If a cold winter threatens, they find themselves a warm spot to wait it out. If conditions are favourable they keep hunting. It is this adaptability that has made them so very successful, and allowed them to survive as a group for many millions of years.

Centipedes’ Eyes: How Many, How Do They Use Them & More!