Dragonflies are insects that spend part of their life as a larva living within the water and part as an adult flying through the air. Like all insects, they are invertebrates, because they have a hard exoskeleton rather than an internal backbone.

Invertebrates make up around 95% of all animals. These are animals lacking an internal backbone. Mammals, fish and reptiles are all vertebrates, however, the majority of animals lack this internal structure. Unlike vertebrates, there isn’t one blueprint for how invertebrates are put together.

Invertebrates have come up with many different and ingenious ways to move their bodies without an internal bone structure. Jellyfish, slugs and worms, for example, have no skeleton at all, while insects and crustaceans have an external skeleton or exoskeleton.

Also read: Are Dragonflies Dangerous to Humans? What About Dogs or Cats? 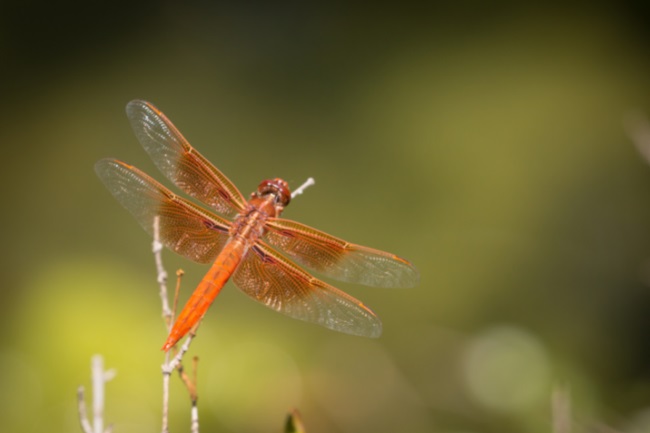 A dragonfly is an insect, and all insects are invertebrates. Some animals might mistakenly be called insects such as slugs and worms, but, while these are invertebrates they aren’t insects. What makes a dragonfly an insect is its exoskeleton, three pairs of legs and the fact its body is divided into three sections; the head, thorax and abdomen.

On the head of the dragonfly they have a set of large eyes, as well as a mouth. The thorax holds the wings and legs, as well as the large muscles to power these. The abdomen is where the digestive system is found, as well as the reproductive organs. While the dragonflies body goes through a dramatic change as it morphs from an underwater larva to an airborn adult, these basic bodyparts and the organisation of how a dragonfly is put together, essentially doesn’t change.

How does a dragonfly move? 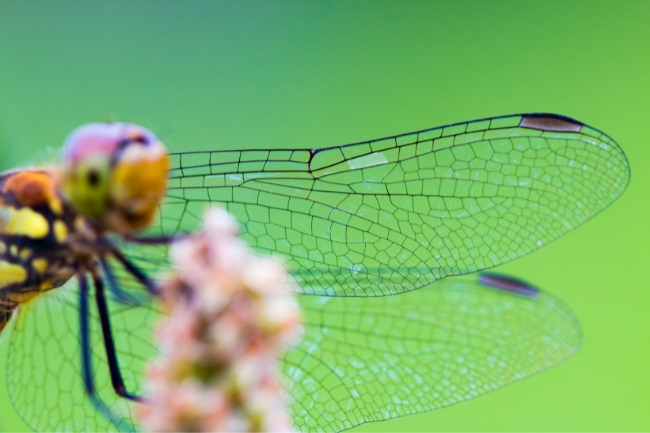 As an invertebrate, a dragonfly doesn’t have an internal spine, however, it uses an exoskeleton to help get around. The exoskeleton is made of chitin, and is an armour-like structure, protecting the insect’s insides. It lacks the flexibility of skin, so it requires joints to give the insect movement.

Even their wings are powered by muscles below their exoskeleton, though to us it may appear like they are attached to the outside. These muscles move the wings independently, this additional flexibilty means that dragonflies can fly forwards and backwards, as well as hover.

The insect uses its muscles to flex and pull the exoskeleton in order to move around. When it comes to growth though, insects are entombed in their own bodies, and the only way to get any bigger is to shrug off their old skin and grow a new one.

Also read: How Many Legs Does a Dragonfly Have? Why Do They Need Them?

It’s what’s inside that matters

Aside from the lack of a skeleton, there are a number of other common differences between vertebrates and invertebrates. Most vertebrates have a similar set of internal organs, including a heart, lungs, brain. Invertebrates, by comparison, work things in all kinds of different ways. Many do not have brains or lungs.

Amazingly the blueprint of a dragonfly has barely changed since before the days of the dinosaurs. Because of the higher levels of oxygen in the past, there were larger species of dragonflies. However, they still looked very much like the dragonflies we see today. This shows how well adapted the dragonfly is for the task it carries out and how successful it has been to have survived successive extinction events.

While we may not think that it is anything extraordinary to see a dragonfly alighting on a lilypad or a tree, it may seem more amazing if you think this exact same tablo could have been seen millions of years ago, with the significant difference that it may have been a T-rex rather than a human, observing the scene.

It isn’t only the dragonfly that has chosen this particular form; damselflies are closely related and very similar to look at. Both groups are invertebrates and insects and even sit within the same family, the Odonata. One of the main differences is how damselflies fly, with their wings not having the manoeuvrability or strength of the dragonflies. Additionally, an easy way to tell the difference is that damselflies tend to rest with their wings held along their bodies, whereas dragonflies hold them straight out.

The reign of the invertebrates

As humans, we view the word in a very vertebrate-centric way, often prioritising mammals and other vertebrates over our invertebrate relatives. However, if you look around you, you’ll quickly find that invertebrates very much rule the world. They turn our soils, pollinate our plants, and are at the beginning of every food chain. Without them, we could not inhabit this world, and neither could any other vertebrates.

So while we may think of dragonflies are a nice extra, and that the fish that swim beneath them and birds that fly above them are more important, the fact is that they are just as critical. They have been around longer than us, and if we play our cards wrong, they will even outlive us.

Are Dragonflies Dangerous to Humans? What About Dogs or Cats?
Next Post: Why and How Does a Dragonfly Fly? (Explained)