Earthworms have small mouths that they use to break up and eat a wide variety of foods. They will eat leaves, roots, fungi and even microorganisms that also live within the soil.

Do earthworms have mouths?

Earthworms do have small mouths, that are located on the first segment of the worm at its head. This first segment is known as the peristomium. In order to eat, the earthworm grabs its food, with strong lip-like extensions above its mouth. Once forced into the mouth the food can then be grabbed by the pharynx, the muscular throat.

Like in birds, the crop doesn’t function to digest the food. It simply stores it in preparation for its entering the gizzard. After entering the gizzard the food will then move down to the worm’s stomach before heading to its intestines. The alimentary canal, the digestive tube from the worm’s mouth, ends at the anus, at the other end of the worm’s body.

What emerges from the worm is referred to as worm castings or vermicast. This worm poo looks very much like any other soil to us, as it contains the elements of the soil broken down by the worm’s digestive system. These castings are incredibly good fertiliser and make excellent food for plants.

Do earthworms have teeth?

Earthworms do not have teeth. They rely instead on their strong mouth to tear apart their food. In order to help process their food their also swallow grit, which works to grind up the food particles in their gizzard. This helps to break down the food to the point it can enter the stomach for the final digestive process. Within the earthworm’s stomach bacteria that live there help to break down the food, allowing the worm to extract the vital elements it requires.

How do worms find their food?

Worms do not need to hunt their food, being almost constantly surrounded by it. They feed by tunnelling through the soil and eating what they come into contact with. However, they do have a number of sensory organs on their skin that can help them locate food. These organs can pick up certain chemicals as well as sense touch.

To many people, the word dirt comes with very negative connotations. Dirt is seen as unclean and unhygienic, yet most of the time the word is applied simply to what could also be called soil. Soil is a mixture of organic matter and rock sediments.

It can contain a wide range of different materials, from decaying plant matter such as roots and leaves to fungal mycelium and inorganic sediments. Along with the remnants of decaying plants and animals, soil also contains a huge amount of living creatures. It is estimated that one teaspoon of soil contains more living organisms than there are humans on the planet.

These living organisms include bacteria, nematodes, protozoa, fungi, algae and other microorganisms. Together, they form an important and vital ecosystem, without which most of the terrestrial life on earth would not be possible.

When we say therefore that worms eat dirt, it’s really not as simple as it first appears. Worms do eat dirt or soil, however, what they are really after is many of the components within the soil. For example, they will eat the plant matter within the soil, or even some of the living creatures living within it. Worms also eat grit in order to aid their digestion.

Earthworms do eat plants, much of their food being composed of plant matter. Worms will eat almost all parts of a plant, including roots, leaves and stems. As they do not have teeth, worms cannot feed on anything that is too hard to bite into. This means they won’t eat wood or plant roots unless they are already partly rotted, such as by fungi.

Worms will eat grass and grass cuttings, however as with other plant matter, worms do not tend to eat living plants on the surface of the soil, instead either pulling dead vegetation into the soil or eating rotting vegetation below the surface. They therefore won’t be munching away on the lawn, however, they will eat through the dense thatch of dead roots below the surface.

Earthworms will eat leaves, however, as they don’t climb trees, they will wait until they fall. Some earthworms will even live within deep leaf litter, feeding off the tasty leaf matter. Amazingly earthworms even pull leaves underground, going up to the surface and grasping them before pulling them into their burrows.

Earthworms will eat plant roots, however, they do not eat living roots. This means they do not harm living plants, instead of clearing away old roots, and aerating the soil and releasing nutrients, helping to feed and fertilise the plants above.

What to feed earthworms 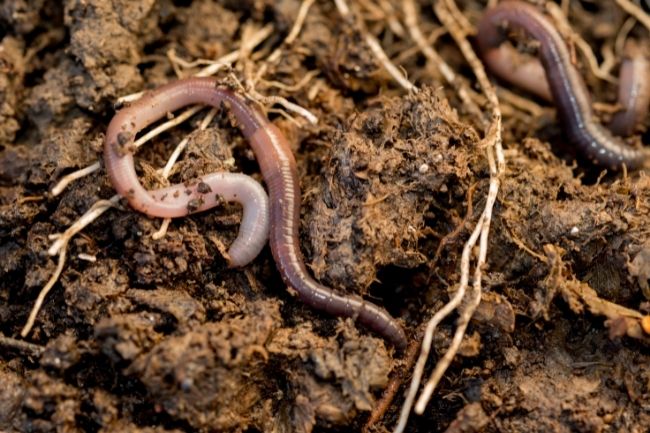 You can feed earthworms a wide range of foods, from fruit and vegetable peelings to eggshells to garden waste, such as grass clippings and leaves. You can even feed them meat and dairy, though it is not recommended to add these to open compost heaps, as this can result in attracting rats.

Worms can be kept in the wormeries, containers where food can be placed in from the top. The benefit of such wormeries can be to get liquid fertiliser or compost out from the wormery to help improve the soil.

Can you eat worms?

Worms are a nutritious food, and in many parts of the world, they are eaten. In fact, many environmentalists argue for using species like worms or different types of grubs as more eco-friendly alternatives to our favourite meats like lamb and beef. This is because they can be fed on scraps like food waste, meaning that their carbon footprint is very small. Not only this but the waste they produce can then be used as fertiliser.

While a worm burger may not sound appealing at first, in reality, it’s no more strange than eating the leg of a lamb or the rump of a cow. And in the long-term such food could not only help us be a leaner, green society, but it could also help feed many more people around the world a nutritious and affordable diet.

Here’s How Earthworms Breathe? (Without Lungs)
Next Post: Earthworms & Composting – How Does it Work?