Grasshoppers reproduce through sexual reproduction, with males and females mating. The females then lay eggs, which in time develop into grasshopper nymphs.

When do grasshoppers lay eggs?

Female grasshoppers can begin producing eggs from shortly after they become an adult, and have mated. Generally, they will start to mate within a week of their final moult. In order to have the best chance of having some offspring survive and pass on their genes, grasshoppers lay eggs throughout their adult life, often every few days. As they can lay hundreds of eggs at a time, this can give them an army of offspring over their short life.

Where do grasshoppers lay their eggs? 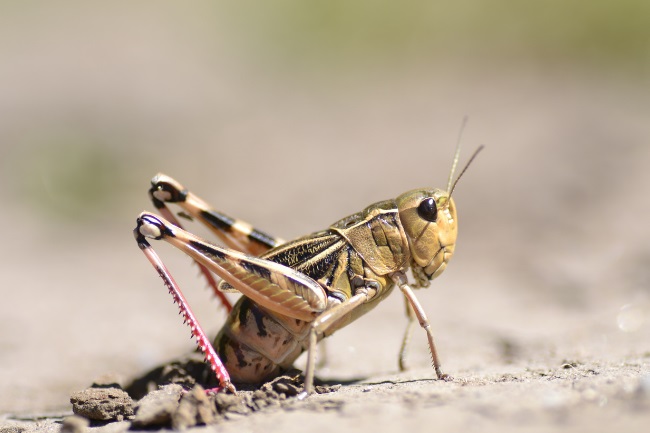 The majority of grasshoppers lay their eggs in the ground. The females will do this by using their ovipositor (a sharp point on the end of their abdomen) to dig into the soil, laying clutches of eggs under the surface. As she lays them, she sprays them with a kind of protective foam, that mixes with the earth and hardens, creating a protective and camouflaging egg pod. These pods can contain tens or hundreds of eggs, depending on the species.

After laying her eggs, the female will use her back legs to brush the soil back over her young. This is important both to hide them from potential predators but also to incubate the eggs. The depth they’ve been laid beneath the ground helps keep the eggs warm during the winter months. Once the air begins to warm, this will heat the eggs and start the process of transformation from an egg to a nymph.

Studies have also found that grasshoppers lay their eggs at different depths. How deep they lay their eggs can affect whether they will survive wildfires, with shallower laying species being more susceptible to being killed off when the soil temperature rises with the fire above. 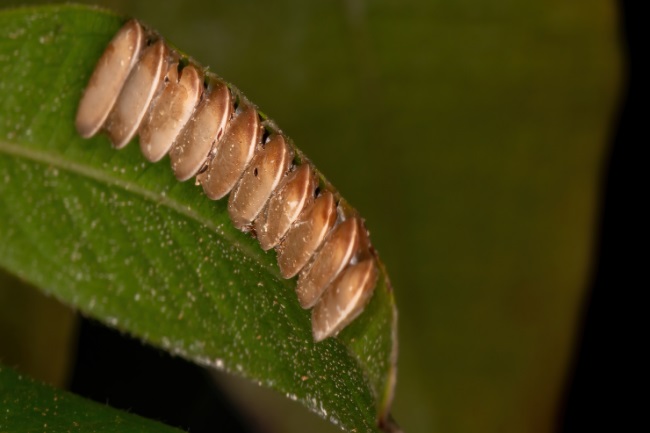 Most grasshopper eggs are white, cream or pale brown and shaped like a grain of rice. Generally, they are laid in batches, packed together in the egg pod. Because the foamy substance mingles with the soil before solidifying, it can just look like a lump of dirt from the outside, making it very hard to spot.

Do grasshoppers protect their eggs?

Like many insects, grasshoppers do not take much maternal or paternal care of their young. Most animals can be divided into those that have few young and care for them more diligently, to ensure they have a greater survival rate, or those that have many young and do not look after them at all. For this second group, they are playing the odds, hoping that if they produce enough, then a few will get through to adulthood and mate themselves.

It might seem like a heart-less strategy; however, it can be the most effective option for animals with a short lifespan. Grasshopper eggs are highly predated with insects such as ants and wasps, either feeding on them directly or laying the eggs of their young on them so they can be feasted on as the larvae grow. Beyond this, pathogens and fungi all attack the young grasshoppers whilst they lay vulnerable. It’s thought over 50% of eggs are lost before the grasshopper has a chance to hatch.

What comes after the egg? 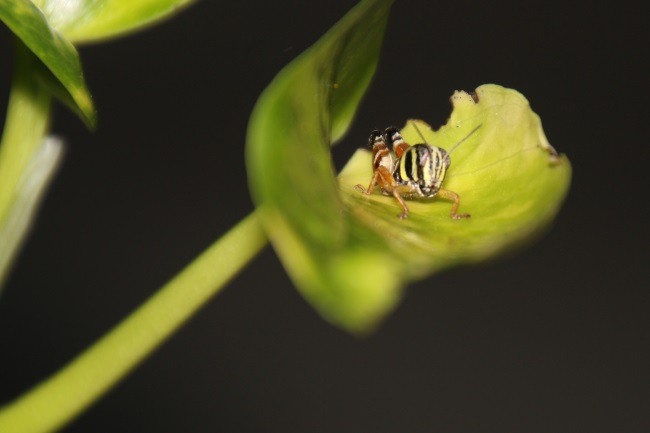 The grasshopper’s egg hatches into a nymph, also known as a hopper. The hopper has a challenging start to life, needing first to emerge from its egg, then fight its way through the egg pod, and finally dig its way out of the soil to the surface. The nymphs start white, but once they reach the light, they gain the colours they will wear as an adult.

Unlike many insect species, the grasshopper’s juvenile form is almost identical to its adult self. In beetles, butterflies and dragonflies, the larvae look completely different from the adult and will even have a different food preference and lifestyle. Yet, the hopper only differs from its parent by its lack of reproductive organs and wings. These develop over the 1-2 months that the nymph is becoming an adult.

Once it has emerged from the egg, the nymph pretty soon begins to feed. It will primarily eat the same food as the adults do, though it will usually eat the softer younger shoots as its mouthparts aren’t strong enough to eat the tougher vegetation.

In order to grow, the hopper needs to moult its exoskeleton, which is rigid and cannot grow with its expanding waistline. Each time it moults, the young grasshopper shimmies its way out of its skin and then has to wait for its new exoskeleton to harden. This is a very vulnerable time of the insect, being easy prey to anything that catches it unawares. Most grasshoppers go through four to five moults before they reach their adult form. In some species, males may go through fewer moults than the female, with the bigheaded grasshopper males only needing four moults while the females need five. 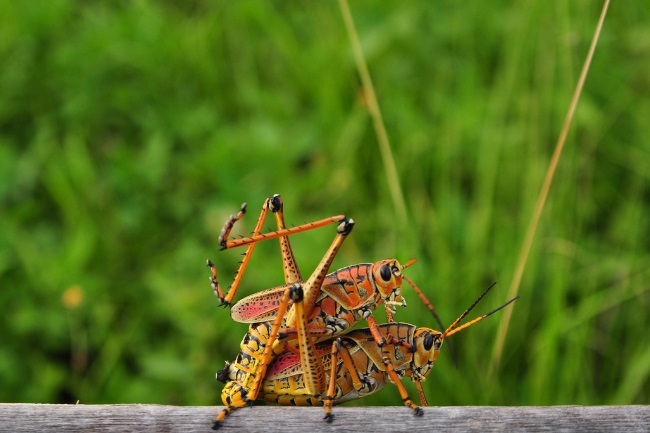 Now that the grasshopper has reached adulthood, its primary goal is to start mating. For most grasshopper species, this means finding themselves a prominent location and singing their hearts out. Yet, although we tend to refer to it as singing, grasshoppers are actually performing a kind of percussion, rubbing raised lumps on their legs across their hardened wing casings to produce a sound.

This song can tell the female about the male’s health and strength, allowing her to decide which male she likes the best. Although we tend to think of males as being the songsters, females will sing as well, just much more quietly. The song produced by the male varies depending on the situation, and he will change between a song produced because he is alone, one he sings at nearby rivals, the one he sings to a listening female and the music he makes just before mating. Some species even have a special song they produce as they are copulating.

As well as those who sing with their feet, some grasshoppers use their wings alone for romancing the females, flying up into the sky and snapping them taunt to produce a kind of crackling sound. These grasshoppers may also have coloured wings, both to scare away predators and dazzle watching females.

As well as all this noise, some males will perform a dance for their mates. This can mean waggling their antennae, flashing their wings, or moving their legs. However he does it, once the female is wooed, the male grasshopper climbs onto her back and moves his abdomen round to connect to hers so he can inseminate her.

Female grasshoppers have an ovipositor, where the male connects to her with his aedeagus (the male’s reproductive organ). Many male grasshoppers can grasp onto the female with this appendage. The mating process usually lasts about 40 minutes. During this process the male passes on packets of his sperm to the female to fertiliser her eggs.

Having mated, the male grasshopper may go on to mate with other females, though many do not live long after having copulated. The female will go on to lay her eggs in a safe location, continuing to lay clutches of eggs until the winter cold finally kills her off. The eggs will enter diapause during winter, a state where they stop developing. Different species of grasshopper then hatch out at different times, as the warmth of the sun ends the diapause.

Like many insects, grasshoppers are greatly affected by weather and food availability. Eggs can quickly die if they sit in waterlogged conditions for too long, while long-dry spells can reduce the availability of food. This means that there will seem to be grasshoppers everywhere in some years, while there are only small numbers in others. Because grasshoppers lay so many eggs, it’s relatively easy for their numbers to bounce back after a bad year, if a good one follows. This is a natural cycle; however, it can significantly affect some crops if species that feed on them have a productive year. For some grasshoppers, climate change is already significantly affecting their numbers, making some areas unsuitable for them whilst opening up others for their young to move into.

The grasshopper that sang all summer

The old fable of the grasshopper that sang all summer isn’t far wrong, with our grasshoppers focusing solely on mating and eating during the warmer weather till they pass away in the winter. Yet, though they may not have worked hard and saved up food like the busy little ants, they do put something away for the year ahead; the next generation. So while we may not hear their song through the winter, the grasshoppers are still there, sleeping beneath the soil, awaiting the warmth of the sun.

Do Grasshopper Legs Grow Back? (Regeneration Explained)
Next Post: How do Grasshoppers Protect Themselves? (Explained)