Ladybirds are a type of insect. They fit into this group because of their body form, made up of a head, thorax, and abdomen, and because they have six legs and an exoskeleton.

The simple answer to whether a ladybird is an insect is yes, they are. However, the more important question to answer is why they are insects. To answer this, we first need to consider what makes something an insect. Insects are a scientific classification of animals; however, we often misuse the term in our day-to-day lives. For example, spiders aren’t insects; they are arachnids, which is where we get the term arachnophobia, fear of spiders. Woodlice, too, aren’t insects. They sit in with the crustaceans. It may seem strange to equate a woodlouse with the crab, but compare this body shape with that of a shrimp, and you’ll soon see the connection.

The insect class, as well as the crustaceans, arachnids, and several more, sit within the phylum of arthropods. This means that they stem from a common ancestor, and at different times evolved into new and varied forms. What makes an animal an arthropod are the combined features of having an exoskeleton, a segmented body, and paired jointed appendages. In less scientific terms, this means they have a hard outside to their body, which can move through the use of flexible joints, and that they have legs, arms, and antennas that come in pairs. None of these things individually are unique to this group, as the shell of a mussel, for example, is an exoskeleton, and tigers have paired appendages. However, the clam’s shell is not jointed, and the tiger has no exoskeleton.

So how do we then separate our lobsters from our ladybirds? Well, insects sit in a separate class from other arthropods due to their bodies’ form. Like the rest of the arthropods, they are invertebrates, having an exoskeleton rather than the vertebra (spine) that places us, humans, in the vertebrates. What separates them from the rest of the invertebrates is that their bodies are divided into three segments; their head, thorax, and abdomen. Beyond this, they also have six legs in three pairs and a set of antennae. Spiders are well-known for their eight legs, which is why they can’t sit in the insect group, while millipedes have even more and are therefore are in the Diplopoda class. 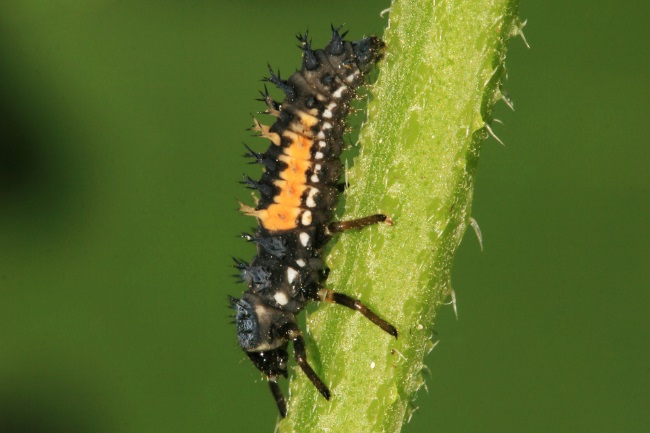 One thing which can make identifying insects confusing is that they are often very different to look at in their larval form. Think of a caterpillar compared to a butterfly or ladybird larvae compared to the adult. The important thing to class it as an insect is that it meets our criteria when it is mature, even if it’s missing a few parts as a juvenile. So let’s take a look at how a ladybird matches up to our insect requirements.

Why is a ladybird an insect?

Firstly it’s pretty easy to see that a ladybird has an exoskeleton. If you’ve ever accidentally lent on one for a second, you’ll have felt how tough and robust their exterior is. In terms of their larval stage, this is also why they need to shed their skin so regularly to grow and develop. An insect’s exoskeleton is made up of the epidermis, the skin’s exterior layer. The material it is composed of is known as chitin, similar to the keratin that makes up our fingernails. Chitin is also what fish-scales are made of. It is not alive in itself, like our hair, and has an exterior waxy layer to ensure the insect is waterproof. It both protects the ladybird from losing too much moisture and from becoming waterlogged. You may see this in action during rainy periods when little droplets may form on the outside of the insects but not soak in. The most familiar part of many ladybird species is the bright red dome marked with black spots. This is part of the exoskeleton and is a set of modified wings known as elytra. Although these are no longer any good for flying, they help protect the ladybird from harm and shield the softer, more practical wings beneath. 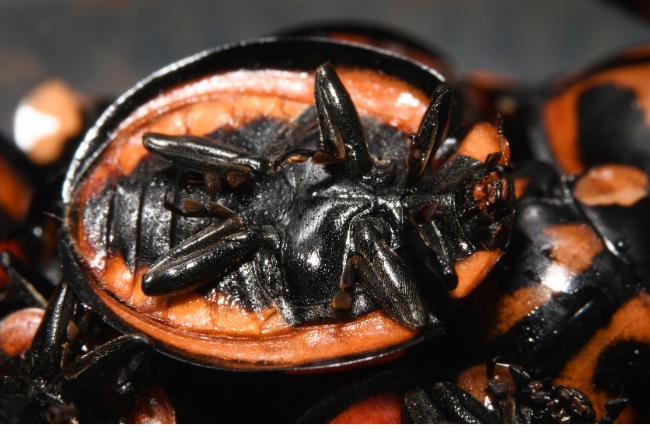 If you draw a ladybird from memory, you’ll probably end up with what looks like a big red body and a small black head attached to it. If we go with this body form, then the ladybird couldn’t possibly be an insect. However, if you flip this little creature onto its back, you’d see a whole different layout. The head of the ladybird is much smaller than you’d think, with the majority of the black you see being the start of the thorax, also known as a pronotum. The thorax is divided into several sections, the rest of which are hidden under the wings. To help understand which parts are which, it’s helpful to remember that the eyes and antenna sit in the head, and the legs and wings will be attached to the thorax. Additional confusion may arise from the white marks on the ladybird’s pronotum, which at a distance looks like they should be the insect’s eyes. However, the ladybird’s eyes are much smaller and a shiny black, sitting further up on its head. The final sections after the thorax are the abdomen. This is where the digestive system and reproductive organs sit.

The final requirement is for the appendages to come in pairs and be jointed, with three sets of legs at most. Now you might find the odd ladybirds that’s had a tough life and ended up with just five legs to its name, but in general, you will quickly see there are six legs. Some groups of insects have lost their legs through evolution. However, they are still classified as insects due to the complexities of scientific categorisation, just as the slow worm is a legless lizard rather than a snake. In nature, it seems there is always an exception to a rule.

What type of insect is a ladybird?

Going beyond insects, ladybirds are further separated into the classification of beetles. Beetles follow the same rules as other insects, with the added requirements that they have hardened wing casings or elytra. They are an extensive group and make up approximately 40% of all insect species. Like ladybirds, many beetle species are highly decorative, often having chosen bright colours to warn predatory species that they are poisonous. Many ladybirds will release a toxic liquid known as hemolymph from their joints if stressed. However, for a human to feel any ill effects from consuming this tiny bug, they would need to ingest over a hundred, which would be quite an achievement in itself.

How long have ladybirds been around? 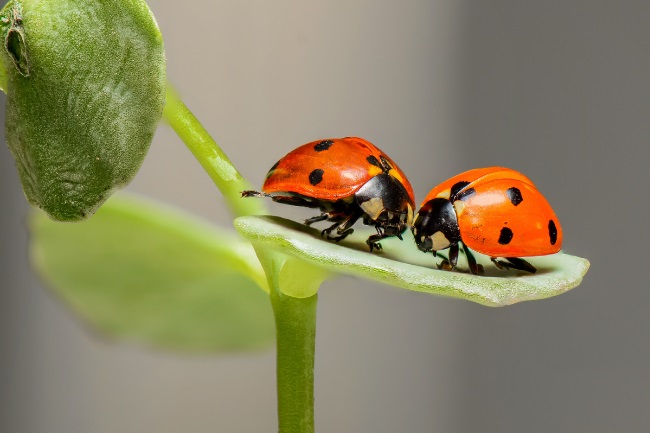 The evolution of ladybirds is somewhat unclear, though beetles and other insects are plentiful in the fossil record. Beetles were busy living their lives long before the reign of the dinosaurs, being thought to have first appeared in the Permian era some 270 million years ago. Yet fossils of ladybirds do not turn up until the Eocene (56 – 33.9 million years ago). Genetic studies, however, have suggested that they probably date back as far as the Cretaceous period. Given that this was when the dinosaurs were at their most diverse, it’s tempting to imagine a little red and black ladybird alighting on the fearsome head of a T-rex. However, it is unlikely these ancient ladybirds would have resembled the species we have today.

Why do we need insects?

There are around 1 million different insect species globally, representing over 80% of all animals. It is estimated that there are between 200 million to 1.4 billion individual insects per human. But before you start to feel surrounded, it’s important to remember that we need insects to survive. They help build our soil, pollinator our crops and provide food for many of the species that we eat. In many countries, they are also an essential source of nutrition. Without insects, we simply could not survive. Even the humble ladybird is vital to us in many ways, from keeping our produce safe by eating our pests to helping to pollinate some of our flowers. Perhaps insects have been given a bad name over the years, with our various phobias and negative stereotypes. Still, when you think of the ladybird, with its cheerful exterior and its busy little life, suddenly, they don’t seem so scary after all. And, let’s face it, if you look at the numbers, perhaps it might be fair to say that we are living in their world, rather than that they are living in ours.

Do Ladybugs Hibernate? (Winter Dormancy and Torpor)
Next Post: How to Attract Ladybugs? (Step-By-Step)