The majority of caterpillars are not poisonous, however, some accumulate poisons taken from the plants they eat. Others are covered in stinging or irritating hairs. 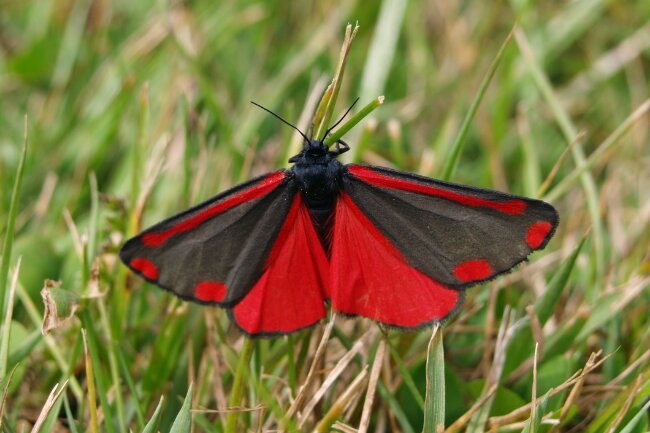 The cinnabar moth is a small black day-flying moth with scarlet markings on its wings. Their caterpillars are just as eye-catching as the adults, marked with black and yellow stripes. The reason for these brilliant colours is that these moths carry the poisons from the ragwort they eat and therefore know they won’t make a tasty meal.

Also read: What Eats Caterpillars? (A List of its Enemies)

The monkey slug caterpillar is as distinctive as its name, looking something like a walking wig or tentacle carrying rug. The slug caterpillars in general are well known for their stinging hairs, and this species is no exception. Its brown colouring makes it particularly dangerous, as it is easily missed when digging around in the garden or out on a walk. 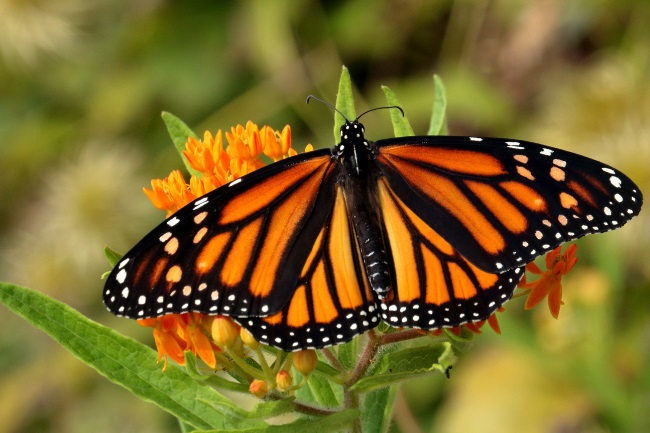 While the monarch butterfly may be iconic, many people do not realise it, and its caterpillars are also poisonous. This species accumulates toxins from the milkweeds that it feeds on. Like other caterpillars, there is little risk to a human as long as they don’t try to eat these caterpillars.

The oak processionary moth is easy to spot as it walks from place to place in a long line, following its fellow caterpillars. Its hair body keeps it safe from hungry mouths, however, as it provides an uncomfortable sting to those that touch it.

What to do, if you encounter a poisonous caterpillar?

While it’s easy to panic once you realise there are poisonous caterpillars out there, it’s important to remember that most caterpillars are harmless, and even the poisonous ones can mostly only affect you if you actually eat them, something you are unlikely to do accidentally.

Within your garden and surrounding green spaces, caterpillars are an essential building block of the food web. They provide much-needed protein for baby birds and other animals. Therefore, removing them should be avoided.

However, if you do need to remove a caterpillar, it is best done wearing gloves. The majority of caterpillars can be picked up without consequences, but a small number of species have irritating spines that can be painful or cause a rash.

Ideally, allow the caterpillar to wander by itself onto your hand and then take it to somewhere else with similar vegetation and cover. Many caterpillars eat specific plants, so it’s essential to ensure they still have food in their new location.

If the caterpillar isn’t playing ball, you can carefully grasp it and pull it from its home. Some caterpillars may throw up on you in an attempt to ward you off, or flick their bodies around to appear aggressive, but they really can’t hurt you.

What does it happen if you touch a poisonous caterpillar?

Most caterpillars are not poisonous, but those that are have accumulated the toxins within their bodies from the toxic plants they eat.

This means, in order to become poisoned by the caterpillar, you would need to eat it. Simply handling a poisonous caterpillar won’t do anything to you.

However, there are some caterpillars that use fine hairs or spines on their skin to sting or cause discomfort. If you handle one of these then you may develop a rash, or raised area and feel pain and discomfort.

For most people, this reaction will not be severe, though for some it could result in an allergic reaction.

How to treat a rash

If a rash left behind by a caterpillar does not fade quickly, then you may want to treat it. If no signs of an allergic reaction occur, such as shortness of breath, it’s likely the rash can be treated at home.

Firstly, remove any hairs remaining in the skin. This can be done by applying tape to the area. Remove the tape and apply a new piece if there are still stings present.

Wash the area and then apply a steroids or antihistamine cream. Ice can also help to reduce swelling.

If the rash spreads to other areas of the body or more serious symptoms occur, such as vomiting, then it might be necessary to visit a doctor.

Are caterpillars dangerous to dogs?

The vast majority of caterpillars are not dangerous to dogs. The only danger is if your dog eats a poisonous caterpillar, or touches one with irritating spines.

It’s important to know how your dog reacts to wildlife. Are they likely to be overly interested or take a bite? Then you will need to be more cautious, not just for your dog’s sake but to help protect and conserve wildlife.

Even if your dog does touch or eats a poisonous caterpillar, the symptoms are most likely to be mild. Caterpillar stings usually cause discomfort but aren’t fatal.

Eating a poisonous caterpillar is the most dangerous option but even then, most dogs are likely to spit the insects out, as the taste of the toxins will be unpleasant. If they do manage to eat it, then they are likely to be sick, as their body realises they have eaten something harmful.

If your dog has ingested a poisonous caterpillar, and has not thrown up and is acting strangely, then the best bet is to visit a vet to get them checked out.

Are caterpillars dangerous to cats?

Just as with dogs, it’s important you understand your pet and know how they react to wildlife. Cats can do a great deal of harm to wildlife due to their often stealthy hunting technique.

Cats are more likely to play with a caterpillar than eat it, which is not pleasant for the caterpillar but largely not harmful to the cat. Exceptions to this are doing caterpillars that may sting the cat, however, the reaction is unlikely to be severe.

If your cat does eat a poisonous caterpillar, they are likely to simply throw it up again. If they don’t and appear to be acting strangely, it is best to visit a vet.

A caterpillar’s poisons come from the plant they are eating. Largely, the caterpillars filter out and store these poisons in their bodies to make them less appealing to predators.

Caterpillars have a different type of blood from humans, known as haemolymph. It carries important nutrients and vitamins to the caterpillar’s muscles and organs. It is likely therefore that it also carries the toxins the caterpillar has taken from its plant host, and therefore would also be poisonous.

Here’s “How does a Caterpillar Make a Chrysalis?”
Next Post: 4 Methods of Hummingbirds Communication