While most people think centipedes have a hundred legs, most have significantly more or less than this, ranging from 15 to 177 pairs of legs.

How many legs do they actually have? 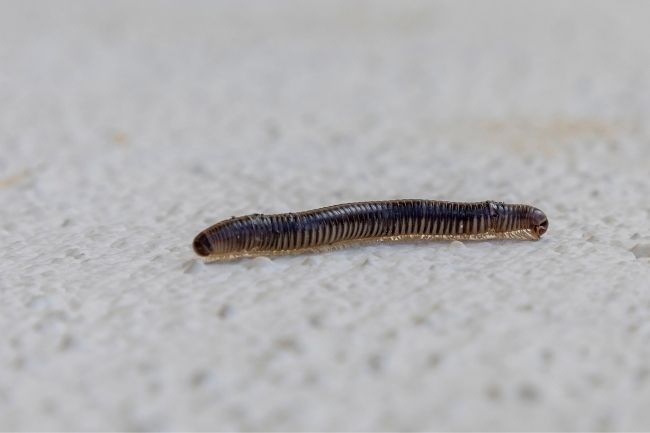 The segment number is likely to vary in part because of the lifecycle they evolved to live in. For example, some of the species with the most legs are those that burrow and dig through the soil, where additional legs might help them to pull their bodies through tight spaces.

With over 3,000 species found across the world, across all continents other than Antarctica, and in a wide range of habitats, centipedes come in all kinds of shapes and sizes. Many of the world’s largest species are found in tropical areas, such as the Amazonian giant centipede. However, despite being the largest species in the world, this mammoth invertebrate doesn’t even come close to living up to its family name, harbouring only 23 pairs of legs.

As well as habitat preference, something else that can help determine how many legs a centipede will have is age. Centipedes aren’t born with all the segments and legs they will have later in life, but acquire them as they grow.

Centipedes, like crabs and insects, have an external skeleton, known as an exoskeleton. This hard outer shell is made of the same stuff as our fingernails, chitin. Imprisoned within this tough exterior, centipedes are unable to grow.

In order to expand and add new segments and legs, they need to moult, shed their skin and allow a new soft layer to harden. This process also allows them to regrow legs that have previously been lost.

What are centipedes’ legs called? 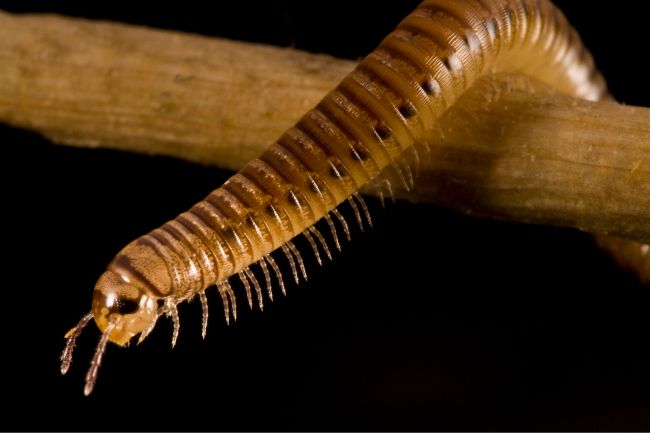 When is a leg not a leg? Interestingly, some centipedes have adapted some of their legs to other purposes.

The first set of legs in centipedes is what is known as forcipules. These are unusual features, with the legs having been adapted into piercing appendages capable of delivering venom. It’s this feature that makes centipedes such ferocious hunters.

As well as the forcipules, many centipedes have an adapted pair of legs at the end of their body that point backwards and are long and thin in shape. These are designed to confuse predators as to which end is the head, the legs looking similar to antennae. If a predator attacks the back of the animal, it can therefore swing round and use its venom to attack.

Another interesting adaptation the centipede has is that its legs get progressively longer as you move down its body, which prevents them from tripping over one another. This allows the centipede to move significantly faster than its relative millipede.

Across the world, centipedes vary widely in the number of legs they have. Here are a few interesting examples.

Looking like an elongated spider, the house centipede could easily be the stuff of nightmares when looked at too closely. While only having 15 pairs of legs, this species likes to show them off by allowing them to be particularly long and spindly.

Found living in human households, though its looks may not recommend it, it is wonderfully helpful in clearing out other inconvenient species such as insects and arachnids.

Officially the smallest centipede in the world at only 10mm (0.39in )long, you might think this tiny critter wouldn’t have all that much space for legs. In fact, Hoffman’s dwarf centipede has an astonishing 82 legs.

Today this species lives out its life in the leaf litter of Central Park, though it’s thought it may well be an import from Asia.

One of the largest species of centipede in the UK, this reddy-brown species doesn’t compare much to its tropical cousins, reaching only 3cm (1.18in). Like many species, it hasn’t been particularly greedy in the leg department either, carrying only 15 pairs. Living amongst the leaf litter of woodlands it is nonetheless a fairly ferocious predator.

The Hawaiian centipede is a particularly striking invertebrate, with a dark, almost bluish body, and orangey-red legs. Found in tropical areas throughout much of Asia, it is well known for its venomous sting, which on occasion has resulted in death. In total, this species has 44 legs.

The serpent island centipede is only found on two islands in Mauritius. With twenty legs, it’s the front set you need to be most concerned about, with this yellowy centipede being well known for its toxic sting. 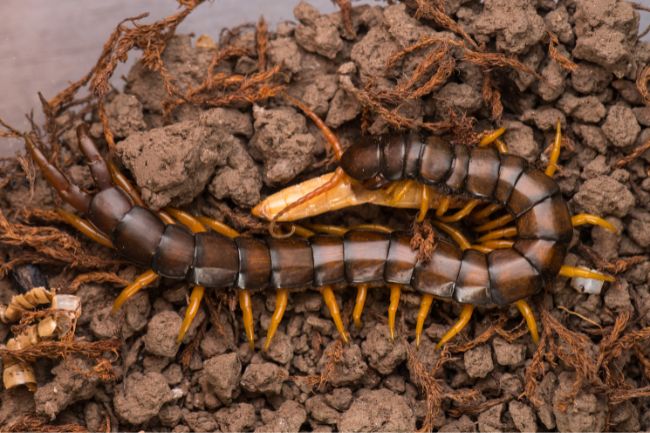 Scientists recently discovered a new aquatic centipede. Most centipedes avoid the water, as they run the risk of drowning. This large centipede, with long legs, has, however, mastered the art of hunting both on land and in the water—quite a feat.

Whether the smallest centipede in the world or the largest, these leggy arthropods are some of the fiercest hunters around. This need to feed keeps their little feet moving, always searching for the next meal.

Their many legs may seem like overkill to us, but their design is clearly very successful, these creatures have been around for many thousands of years, with very little change in their design. So while they may not have exactly 100 legs, they certainly have enough to get them wherever they want to go.