Ants do have brains, though they are very different from a human brain. As well as a brain within their heads, they have a series of ganglia running down their bodies that help control particular limbs.

What is a brain?

A brain is a part of an animal’s central nervous system. It is a group of neurons that help to control, and send and receive information to other body parts.

Brains vary a great deal depending on the species, both in size and design. Many animals have ganglia elsewhere that provide additional control over limbs or parts of the body, but these are generally still be linked into the main brain.

Some animals have been found to have no brain at all, including corals, jellyfish and oysters. These animals usually have more minor nerve clusters elsewhere in their body that help sense and control their actions.

Do ants have brains?

For a long time, scientists weren’t sure whether to define the cluster of nerves in an insect’s head as a brain. One particular complication was that insects do not do all their thinking only in one place. As well as the nerve cluster in their heads, they have a series of ganglia located down their bodies.

Ganglia are like mini brains that control certain functions, such as moving limbs. This is why a decapitated insect can still move its legs or twitch for a certain amount of time. These series of nerve clusters are connected to the brain and located from the head through the thorax to the abdomen.

The ‘brain’ itself if more like a larger ganglion, lacking much of the structure we would see in a mammal brain. Like mammals, the brain is located in the head of the ant, and then connected via a series of nerves to various organs and muscles around the body, including the other ganglia along the ant’s body.

Information goes both ways, travelling up to the brain from the various parts of its body, and down from the brain to the body, using various chemical signals to providing instructions and feedback.

The size and structure of an ant’s brain varies a great deal not only between species but also between different casts within the nest, as their tasks can be vastly different. One of the main differences is that smaller ants tend to have smaller brains. This is fairly typical in nature, as smaller creatures generally have proportionately smaller brains.

However, for their size, it is thought that ants have a relatively large brain. This is thought to be due to the fact they are social creatures and need their brains to process complex interactions and communications, in the form of pheromones, touch and visual signals.

Compared to other insects, the parts of the ant’s brain that deal with visual cues are mostly relatively small. This is because most ants have fairly poor eyesight. This part of the brain is often larger in winged males and females and in predatory ants, as for these groups vision plays a much more important role

The part of the brain that deal with sensory data from the antennae is relatively large in ants compared to many insects. This is perhaps because they rely more heavily on the data from their antennae than that from their eyes.

An individual ant brain has been found to have around 250,000 neurons. Compare this to a human brain that has around 100 billion neurons, and it may not seem very significant. However, many scientists argue that the colony as a whole functions are one large brain composed of many individuals, due to the intensely collaborative nature of the ants’ society.

If considered as a whole, it could be argued that the colony’s brain is equivalent to the brain of a mammal. The fact that, within a larger colony, an individual ant’s brain can be highly specialised to their particular task means that each caste holds their own specialist resource of information without which the colony could not survive.

How do ants use their brains?

Ants use their brains for a wide range of tasks. Different parts of the brain are used to process different information. For example, most ants have large and well-developed antennae lobes and much smaller vision lobes, as the former is a more significant sensory organ for them.

Also read: If You Wonder “Do Ants Have Bones?” (Exoskeletons Explained)

Ants have been shown to have memories, able to remember routes and where to find food, for example.

The usefulness of vision varies greatly between ant species and individuals. Some ants are completely blind, meaning they have no vision data to process, while most have two compound eyes and up to three small simple eyes known as ocelli.

Depending on their task, ants will have a range of visual data to process, including identifying landmarks and using polarized light to navigate, or identifying food or threats.

Antennae are a far more important resource for information for ants than vision. Antennae have a series of hair-like chemosensors across their surface. These sensors are tuned in to pick up certain chemicals. These might be chemicals that indicate the presence of food or even of a threat.

Ants lay chemical trails known as pheromones to help guide one another to sources of food or even back to the nest. It’s even been found that colonies have their own smell, meaning ants can identify when another ant is from a different colony and therefore a foe rather than a friend.

As well as chemical detection, antennae are used to sense through touch and can pick up other information such as temperature and humidity.

As well as processing external information, ant brains also need to process internal messages, so they can move their body. This will include controlling their legs, wings (If they have them), jaws, and other bodily functions such as the opening and closing of spiracles.

However, ants can detect vibrations through their feet, which allows them to hear sounds. They also use sound as a warning signal, some species rubbing their legs across their exoskeleton to produce sound when they are in trouble.

This sound travels further than pheromones, helping to call in help from further away. 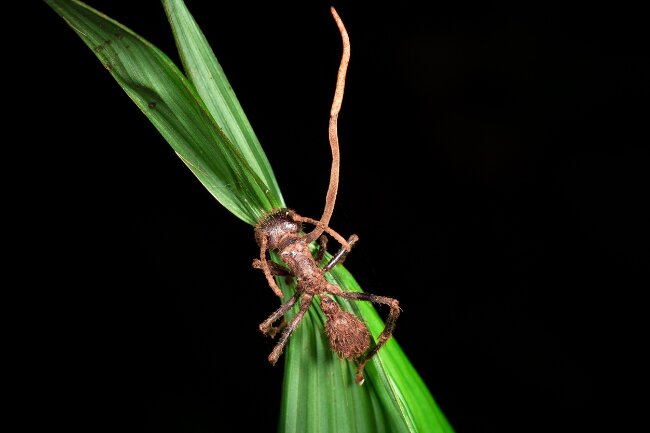 One of the most fascinating and terrifying examples of brain manipulation by a secondary species is that of the zombie ant fungus.

This fungus, along with several other similar fungal species, has adapted to infect ant species. Once infected, the ant’s behaviour changes as the fungus releases chemical signals into its system that mimic the chemical signals from its brain, essential hacking its internal computer.

Once taken over by the fungus, it climbs up a plant and then grabs hold of the plant with its mandibles, securing itself in place. The fungus then completely consumes the ant, bursting out of its body and releasing spores that can infect new ants.

Interestingly, it’s been found that the chemicals the fungus releases are specific to a preferred host species, and do not get the desired response when other ant species are infected.

Scientists have observed a particularly fascinating ability in the queens of Indian jumping ants.

When the queen dies, these ants compete to see who will take her place. When the last worker ant has won the games, her brain will shrink by a quarter when her ovaries begin to grow.

More fascinating, scientific experiments have demonstrated she can regrow these lost neurons if she becomes toppled from her throne.

Our human view of intelligence is often very skewed to what we consider to be intelligent properties. From the ability to solve puzzles to a demonstration of emotion. Yet, perhaps the question of intelligence should reflect the needs of the animals instead.

Ants may not individually be the most intelligent of creatures, yet their brains are so perfectly adapted to work in cooperation with one another, and to perform specific tasks, that they have truly conquered the world, with it being estimated that up to 20% of the world’s animal biomass may be made up of ants.

Still, whether or not it can be agreed upon that ants are a clever group, we can certainly state their design is nothing short of ingenious.

Do Ants Have Eyes? How and What do They See?
Next Post: Do Ants Sleep? How, When, Where… Explained