Ants do not have an endoskeleton, bones, instead, they have an exoskeleton. This is an external hard shell that supports and protects their muscles and organs. There are many advantages to this system, however, it also means that they need to shed their skin whenever they want to grow. 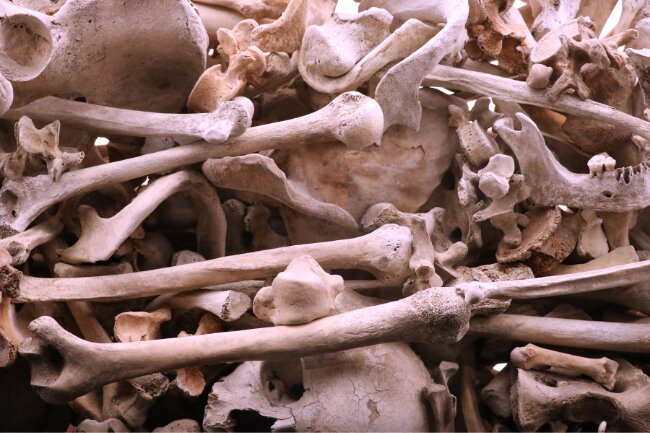 There is something fascinating about bones. Often they are the last thing to remain after all the rest of the body has decomposed. They can offer us all kinds of insights into the life that has gone before, from reconstructing the faces of the dead to working out what creatures a barn owl has been feasting on.

Bones are a type of rigid tissue that provides internal support and protection to the muscles and organs that make up the rest of a vertebrate animal’s body. While we may think of bones as dead and unchanging, similar to fingernails and hair, bones are living tissue that changes and grows throughout an animal’s life.

Bones are made up of several components, and there are several different kinds of bones in a body.

Long bones, such as the shin bone, are made of a hard outer and soft inner part, the diaphysis and the epiphysis. The outer bone is made of osseous tissue, while the inner bone is composed of bone marrow. Either end of a long bone is the epiphysis, which contains spongy bone.

Flat bones, like the skull, have a different composition, with two litter layers of dense bone and a spongy bone in the centre.

Do ants have bones?

The smallest vertebrate in the world is a frog species known as Paedophryne Amauensis. It is approximately 7.7 mm (0.3in) long. While this may still be significantly bigger than the biggest ant, the bullet ant at 3-4mm (0.11-0.15in), it shows that bones can be shrunk down to tiny sizes if needed.

Yet, ants do not have bones. This is because they are invertebrates rather than vertebrates, meaning they lack the central spinal column.

There are many different kinds of invertebrates, from insects to jellyfish, and they often have little in common other than the lack of a spine. These species have adapted to deal with the question of how to support themselves in many different ways.

Ants are part of a group known as Arthropods. This group has evolved to have exoskeletons in place of bones to help protect them and get them around.

Also read: Is a Dragonfly a Vertebrate or an Invertebrate?

What is an exoskeleton?

An exoskeleton is an external hardened skin that provides structure and support to the muscles and organs of the animal’s body. It is made of chitin, the same stuff that makes up our fingernails and hair.

There are advantages and disadvantages to this kind of system. One of the advantages is that it provides an external shield against the world, offering protection to the internal organs. However, because this hard shell cannot expand, it has to be shed whenever the animal needs to grow throughout its lifetime.

Shedding is a dangerous time for these animals, as it takes time for the soft skin underneath to harden and offer them the same protection.

Another advantage of the exoskeleton is that it protects the animal from external weather, in particular moisture such as rain. It prevents the ants from becoming waterlogged and also helps reduce the amount of moisture they lose on hot days.

It also acts as a natural armour, preventing damage and attack, however, many parasitic species have evolved methods of piercing the exoskeleton for their own gain.

The exoskeleton is moved in a similar way to an internal skeleton, with muscles attached to the inside to pull it here and there. To allow freedom of movement, the different parts of the hard exoskeleton are attached together with softening more pliable areas.

The exoskeleton also has holes for breathing and so that appendages can be attached to internal muscles. Though this system may seem bizarre to us at first it is highly successful, with groups such as crustaceans and insects relying on it, meaning there are more animals with an exoskeleton than an endoskeleton (bones) in the world.

Science fiction loves to create giant, terrifying insects to stalk and kill defenceless humans. However, it’s actually the exoskeleton, which prevents this from occurring. Due to its relative weight and thickness to the rest of the animal, if they were supersized, the exoskeleton would either crush the soft body inside or they would not be able to move.

A tiny ant skeleton, displayed in a miniature glass case, would certainly be a sight to behold, however, it’s simply not meant to be. We may be used to the idea that under everyone’s skin is a heap of bones, but in fact, there is an amazing diversity of structures across the animal kingdom.

From the boneless jellyfish to the hard-shelled crab, nature has found many different ways to get around the problem of how to move body parts around. When it comes to ants it’s no doubt one of the keys to their success, with 12,400 species across the world, they don’t seem to need a spine after all.

“Do Dragonflies Sting?” Are they Dangerous to Us & our Pets?
Next Post: Do Ants Have Eyes? How and What do They See?