Female cicada killers do have a stinger, which they use to paralyse their prey, cicadas. Yet these solitary wasps are not aggressive to humans and will only sting you if you accidentally step on them or squash them.

What is a cicada killer? 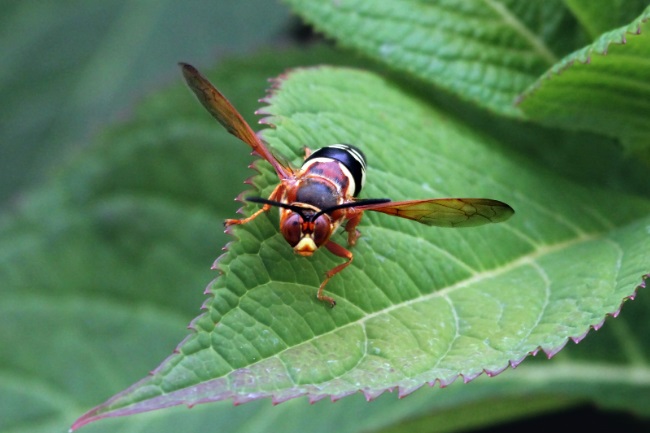 Cicada killers are a type of solitary wasp, part of the digger wasp family. These large black and yellow wasps are named after their ability to hunt and kill cicadas, which are often the same size or larger than them.

Cicada killers emerge at a time to coincide with their prey, usually around June and July. Female cicada killer wasps spend their short life as an adult, around six weeks, digging out a nest burrow and filling it with cicadas. They prefer sandy or dry soils and often nest on banksides, road verges, or lawns. They excavate the hole using their front feet, and even climb into the hole to push out the sediment with their heads.

Once completed, the burrow will be around 10 inches in length with several chambers, each designed to be the home of different larvae. Males do not help with the best building. Instead, they emerge before the females and spend their time fighting other males to set up a suitable territory. Their main aim is to attempt to mate with any female they find.

Once she has completed her burrow, it’s time for the cicada killer to live up to her namesake and head out on the hunt. It is thought she finds her prey by sight rather than sound, which may seem strange given how noisy cicadas are. However, cicada killers seem to demonstrate a preference for female cicadas, which mostly do not sing. It’s unclear why this might be. Males often have large air sacs in their body to help amplify the sounds they make, so there may simply be more meat on the females. 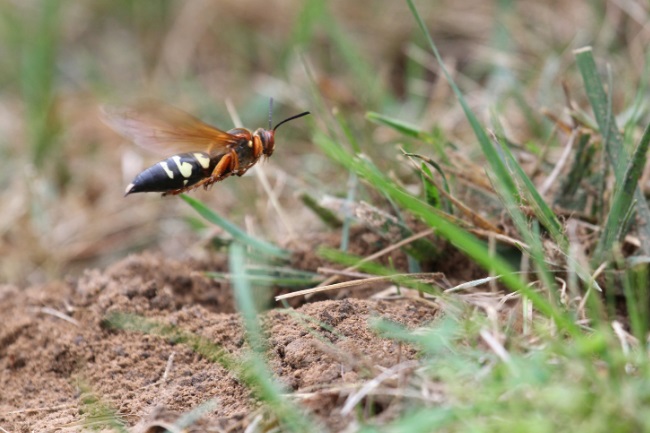 The unlucky cicada really has no means of defence once under attack. They do not possess a stinger, and their mouths are made for sucking-sap rather than biting. A cicada’s only chance to protect itself are its skills in hiding and flying. Therefore, once the cicada killer has a good grasp on them there’s really nothing they can do.

The female then stings the cicada, usually in the abdomen. This sting doesn’t kill it. Unfortunately for the cicada, it will remain alive but paralysed as the cicada larvae munch their way through its body. It’s like something from a sci-fi horror movie.

Having paralysed the cicada, the wasp will take it back to its nest. It will either do this by dragging it along the ground or by climbing to a higher point on a tree and then gliding down to its nest. Therefore, for ease of access, the cicada killer tends to nest near areas with plentiful cicadas.

The wasp will provide one or more cicadas for every chamber, laying an individual egg in each. The larvae will then hatch and begin consuming the living cicada. This method of meat preservation is common among insects such as hunting wasps. In some species where live food is provided, the larvae carefully avoid eating the essential organs till last, as this keeps their meal alive and therefore fresh, for longer. Eventually, after around ten days, the larvae pupate, weaving a cocoon around themselves and emerging the following year as adults.

Amazingly the adult cicada killers are vegetarian, eating largely pollen and sap. Their hunter ways are purely for the sake of their offspring.

Do cicada killers bite or sting? 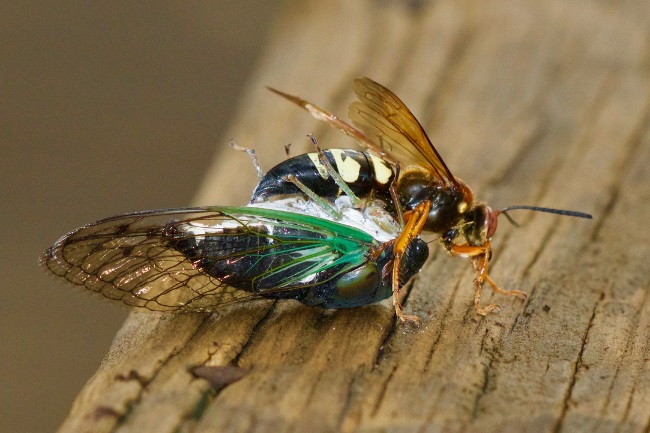 Like all wasp and bee that possess stinger, as many don’t, only the females have a stinger. However, a female cicada killer is only interested in her prey. Stinging anything else would be a waste of her precious energy and endanger her life as she might be squashed in retaliation. Although cicada killers are not aggressive to humans, they will sting if stepped on or held.

Because of their tendency to nest in lawns, this is where the conflict usually occurs. It’s worth keeping an eye out for them during the months in which they are active as adults, and wearing shoes when walking across lawns or other areas they are using.

The other common reason people become scared of these wasps is the male’s overenthusiastic defence of their territory. Because of their wish to scare anyone off that dares to step on their turf, they will often chase humans. These 0.5-2inch wasps can be very intimidating but it’s worth remembering the males do not have a stinger, so they can’t do any harm.

Both males and females can bite; however, they have no inclination to bite humans.

Because of their size, we are often inclined to think the sting of a cicada killer would be very painful. However, those that have experienced it state it is only mild discomfort. This is probably because the venom produced by the wasp is only designed to paralyse cicadas rather than kill them, and is not designed for large mammals like ourselves.

The sting of the cicada killer is highly dangerous to the cicada but does not affect us. The exception will be if you are allergic to other types of wasp or bee stings, in which case you may have an allergic reaction to this sting too.

How does a cicada killer sting compare with a wasp sting?

Most people who have been stung state a wasp sting is much more painful than a cicada sting.

What happens if a cicada killer stings you?

If you are unlucky enough to be stung by a cicada killer, it’s worth following the same procedure as with any sting. Remove anything that might be embedded in the area and keep an eye on any symptoms of an allergic reaction. An antihistamine can help to reduce the swelling, but any severe symptoms should be discussed with your doctor. Most likely, you will see a small red lump and feel a little discomfort and itchiness in the area.

People often confuse wasps, hornets and cicada killers. The species we common call by the simplified term of ‘wasps’ are largely the common or german wasps. These social wasps live in hives made of chewed up bark and have one queen that lays all the eggs. They eat a variety of insects as well as fruits and are often an annoyance to humans as they are attracted to our foods like jams, meats and sugary drinks. Though they do not sting readily, they can be angered into stinging if you try to swat them or disturb their nests. Aside from their very different lifestyles, they can be separated from cicada killers as they are largely yellow with some black, whereas cicada killers are largely black.

Hornets also have a vicious reputation due to their large size and painful sting. Luckily they too aren’t interested in humans unless we threaten them or their nests. They also eat primarily other insects and live communally in a paper nest. Although they have more black than wasps they are still more yellow than cicada killers. One sure-fire way to know that you’re looking at a cicada killer is if it’s dragging a cicada back to its nest. 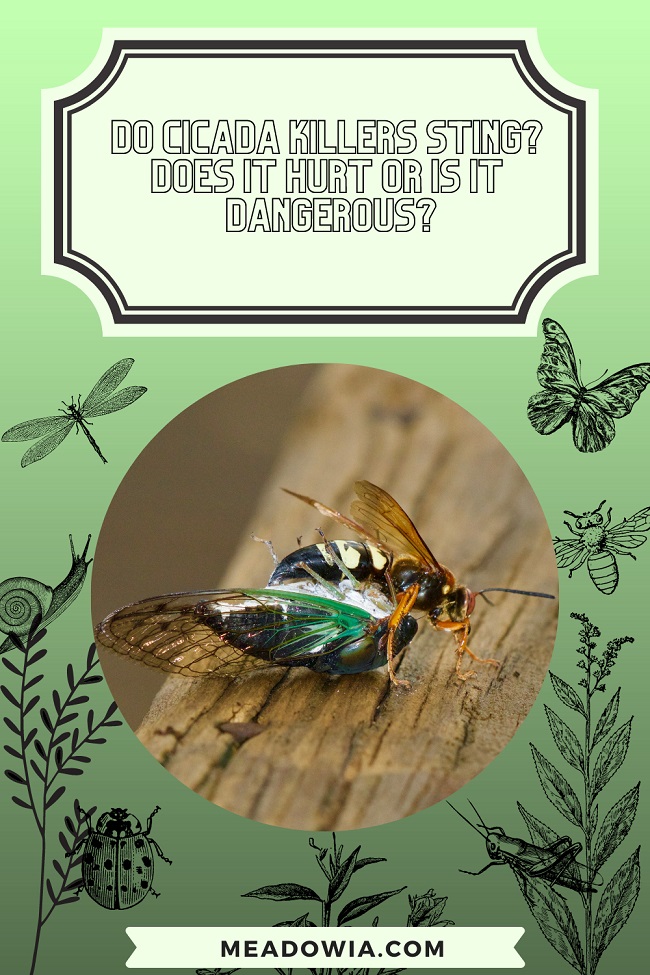 It’s hard to appear like the good guy with a name like a cicada killer, yet these solitary wasps perform a vital role within our ecosystem. They help to control the numbers of cicadas by predating this noisy little insect. They are also a fascinating and hard-working species. The female’s efforts digging out her nest, sometimes using her own head for the task, and capturing prey larger than herself for her young, is undoubtedly a testament to motherhood. And while the idea of a larva eating its paralyzed prey alive might not appeal to us, it is a fantastic adaptation, taking every advantage to help these little wasps survive.

So surely, after all that hard work, we can do our bit and allow these little wasps to go about their business? They aren’t interested in our big and complex lives, but we should certainly be able to respect and value theirs.

Firefly Larvae: Do They Glow, How do They Live & More