Cicadas start life as an egg, laid into a slit in a tree. These eggs hatch and drink the tree sap before dropping to the ground and burrowing into the soil. They then emerge between 2 – 17 years later and moult into their adult form; the whole cycle starting again.

How do cicadas find a mate? 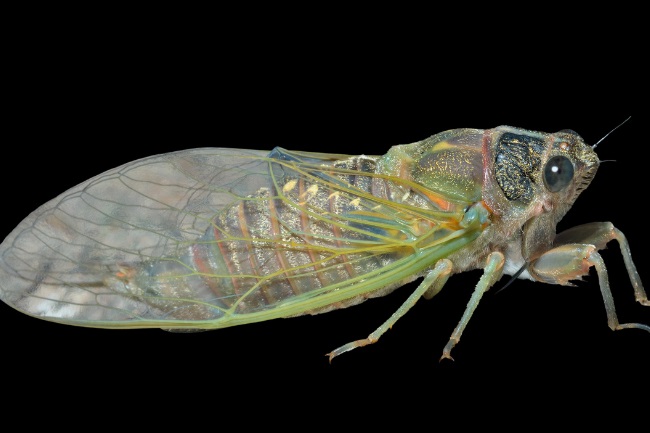 Like many animal species, it’s the male who needs to work hard to attract females. This is due to the fact that females have to put more of their time and energy into raising the next generation, and in many cases, don’t have as many mates as the males. Therefore, she is more inclined to be fussy as she wants the best genes possible to ensure a better likelihood of her offspring surviving.

Some animals use their brilliant colours to attract in a mate, while others use fascinating courtship rituals. We often think of the more elaborate types of mate selection being carried out by birds or mammals, but insects can have equally complex acts to perform.

For cicadas, it’s a musical extravaganza, the males needing to sing their best song to convince the females they are worth having. While the rasping buzz of the cicada might not be appealing to us, it’s all the female needs to begin to suss out who she wants to be her baby daddy.

The males create their song through vibrating parts of their exoskeletons called tymbals. These ridged concave areas are pulled quickly in and out with a small muscle, and air sacs within the body of the male help to amplify the sound.

Although this is the most common way for male cicadas to create sound, some also use other techniques. Stridulation is where the wings are rubbed against the exoskeleton. Crepitation is the hitting of the wings against each other or the exoskeleton. And two Tasmania species even vibrate the substrate they are standing on rather than create an audible noise.

Males will often sing in choruses from specific trees to call in females to a particular area, and many species only sing at particular times of the day. Females, however, do not sing as audibly, mostly only performing wing clicks to reply to the males. She will select the male she thinks most suitable based on his sound, and will then fly in to mate.

Also read: How & What do Cicadas Eat? (Eating Habits Explained)

How do cicadas mate? 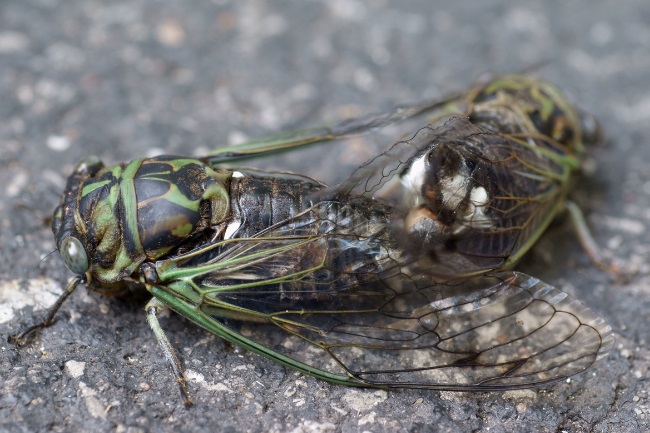 Cicada males produce a courtship song once they have found a suitable female. If the female is happy with the male, she will allow him to approach and then join end to end to mate. During the mating process, he will pass over a package of sperm, which the female will then use to fertilise her eggs. The cicadas can remain attached for a long time, which makes them vulnerable to predators but prevents other males from mating with the female.

Also read: Do Cicadas Make Noise? How Does That Sound Like? (Explained)

When do cicadas mate?

Cicadas mostly emerge from the ground during the summer, around June or July. The adults will only live for a few weeks, and mating will take place at this time.

A cicada egg looks a little like a grain of rice. The female will cut a slit into the tree bark with her ovipositor and lay her egg into it.

How long do cicada eggs need to hatch?

It takes between ten to sixty-five days for a cicada egg to hatch. Safe in their slit in the tree, these young nymphs can feed on the tree sap without being spotted. Once they are ready, they will drop to the ground and tunnel into the soil, where they will remain until they are willing to emerge and moult into their adult form.

How long do cicadas live underground?

How long they spend underground depends on what species they are. Most cicadas will spend between 2 – 5 years living in the soil, but the longest-lived, the 17-year cicada, will spend 17 years underground.

Generally, cicadas are divided into annual, periodic or protoperiodical species. The annuals emerge every year in similar numbers, while the periodic emerge on mass after a set period of time, such as the 13 or 17-year cicadas. This has the benefit of overwhelming predators, who can’t possibly eat all the cicadas that appear in those years. It also prevents predator numbers from adjusting to the regular food provided to them by the annual cicadas.

Protoperiodical cicadas emerge every year but also have years when they appear in vast numbers. This probably has some advantages of both systems, as periodical cicadas risk the year they emerge having unsuitable conditions.

Underground the nymphs spend their time burrowing around to feed on the roots of plant species, sucking out the sap just as they do in their adult form. Because of their size, they often feed on grassroots or the roots of perennial plants. As they grow, they moult four times. This moulting is essential to allow them to grow. As insects, they need to moult their exoskeleton in order to do this.

How long do cicadas live above ground?

The emergence of the cicadas from the ground can look a little like something out of a science fiction film. The alien-looking nymphs dig themselves out of the ground like zombies emerging from the grave. When the emergence is that of one of the periodical species, this can be particularly dramatic, as the numbers are so large.

The nymphs then climb up the nearest tree or shrub in order to have their final moult. In this moult, they finally gain their adult form and their wings. After having shed their exoskeleton, they are particularly vulnerable, as their bodies are soft. It takes time for the exoskeleton to harden and its wings to unfurl properly. For this reason, they emerge at night when they are less likely to be seen by a predator. 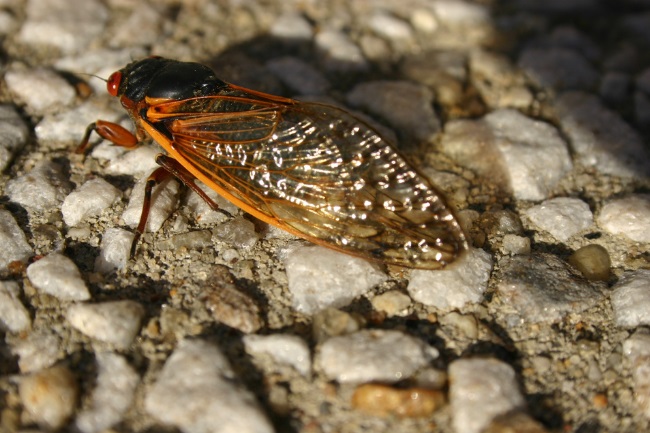 Once they are fully hardened, they can begin to feed on the sap of the trees and shrubs surrounding them, and in the daytime the males can start to sing to attract females. As with many insects, the adult portion of their lives is relatively short, and its primary purpose is to mate and pass on their genes to the next generation.

Most cicadas will only live a few weeks as an adult, if they are lucky. Many species take advantage of these plentiful, nutritious insects to stock up on their reserves before autumn. Birds, mammals, reptiles, even other insects such as cicada killer wasps will happily munch down on a tasty cicada.

One particularly strange phenomenon is a fungus that attacks the cicadas. Massospora cicadina has evolved to target periodical cicadas. The cicadas nymphs can become infected when they dig their way out of the soil. As the infection progresses, the cicada continues to mate and sing and move around, but in time the back part of its abdomen drops off, revealing a white fungal plug. This means the cicada has become infertile, but it will continue to mate with other cicadas, spreading the infection.

As with many insects, we only really encounter the cicadas in their adult form. From grubs living in tree bark before they become beetles to dragonflies residing below the surface of the water before they fly away as adults, we often only get to see the very last part of an insect’s lifecycle. This usually means we believe insects to be transient within our worlds, here for a little while, and passing away again quickly. Yet these species are always there, busily living their hidden lives, waiting for the day to emerge and remind us that they are as big a part of our world as we are.

Do Ants Have a Heart? What is it for? (Explained)
Next Post: Wondering “If Ants Have Blood?” What is Hemolymph?