Ants do have a heart, like all insects, however, it looks and functions very differently from our own. An ants’ heart is long and thin and pumps the ant’s haemolymph (blood) from one end of the body to the other.

What is a heart for?

In humans and many other animal groups, the heart has a very clear function. Its rhythmic pumping helps to force blood around the body, delivering oxygen to the various organs. Without the constantly moving blood, our organs would become starved of oxygen, and begin to die.

As well as transporting oxygen-rich red blood cells, which give blood its brilliant scarlet colour, blood acts as a vessel for all kinds of other ingredients, from delivery of vital minerals and vitamins to removing unwanted waste.

The human heart is probably one of the easiest organs to recognise, its rounded form and two chambers made famous by horror movies and science shows alike. Yet within an insect’s chest, a whole different system has been set up to perform a very similar function, one that we would barely recognise.

Do ants have a heart? 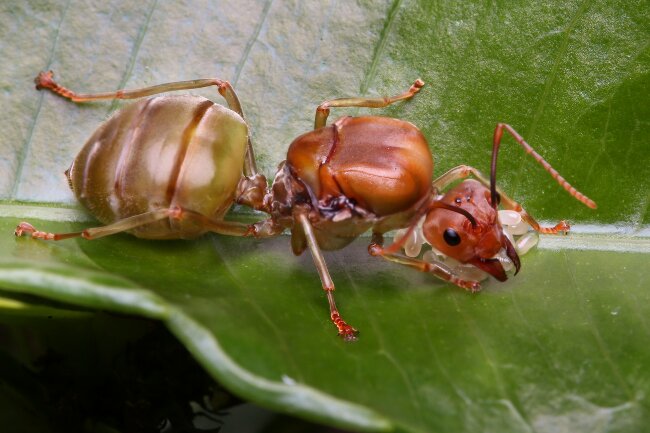 Insects have a very different circulatory systems to that of humans. The difference starts from the most basic element, with the blood. The fluid that moves around insects’ bodies, which is the equivalent to our blood, is called hemolymph.

Unlike our blood, haemolymph isn’t red. This is because it doesn’t contain red blood cells. The reason insects lack these cells is that their blood doesn’t need to transport oxygen around their bodies. In most animals’ bodies, the air is drawn into the lungs, and from the lungs, it is absorbed into the blood.

The blood then moves around a closed circulatory system, meaning that the blood travels to organs via arteries and veins. In insects, the blood doesn’t need to carry the oxygen to the organs because air doesn’t enter into the body at one point.

Instead of one set of lungs, insects have many spiracles along with their bodies, small holes within their exoskeleton through which air is drawn into the body. Once it enters the body, it is fed directly to where it needs to go, rather than needing to be circulated.

The haemolymph in an insect’s body, therefore, plays a very different role to the blood in ours. Rather than carrying oxygen, it simply carries other ingredients such as minerals, sugars and hormones to the various organs.

Another key difference between our system and that of insects is that their circulatory system is an open system, while ours is closed. That means that within our bodies, blood is ferried around within veins and arteries. Within insects, the haemolymph simply fills the body cavity, surrounding the organs and fats that fill the rest of the space.

The dorsal vessel is divided into two parts. The length closest to the head is the aorta, while the second part is considered the heart. In terms of shape, the aorta and the heart don’t differentiate much, both being long thin tubes, however, what separates the heart is the presence of chambers divided up by Ostia.

Additionally, smaller pumps exist at the base of some appendages, such as antennae and wings, in order to push the blood into these areas. The heart tends to be located within the abdomen, the final segment of the ant’s body. This is where all the vital organs are kept. The aorta extends the rest of the way to the head.

Also read: Do Ants have Brains? The Purpose of Ganglia Explained

We have a tendency to think of ants as tiny wind-up toys, busy about their business, but not alive in the same way we are. We might feel guilty if we accidentally hit a pigeon in our cars, but few people feel bad when they step on an ant.

Yet, just like all living creatures, ants do have a heart-pumping within their bodies, moving round blood that is not so dissimilar to ours. They may be different from us in many ways, but their bodies are still busy keeping them alive, just like ours.

Do Ants Have Ears? How do They Hear?
Next Post: An Extensive Guide to Cicada’s Lifecycle (Mating, Eggs, etc.)