Earthworms are not disease carriers, and generally do not have an impact on human or animal health. As they are often referred to simply as ‘worms’ they may be confused with parasitic worms that are harmful to humans.

Many people associate worms with disease and death. This can be in part because of a confusion between worms and maggots, and also because worms spend their time moving around between soil and within decomposing matter.

Another reason why they may have negative associations is because there are worm species across the world that are associated with serious diseases. Parasitic worms such as the tapeworm and nematodes that can cause serious conditions such as blindness are not too dissimilar in look to our garden earthworms.

Yet, many of these worms are in entirely different groups to our earthworms, have different lifecycles and have adapted to a very different food source.

For a start, earthworms have no interest in living matter. Whether it be a living plant or a human toe, earthworms can’t grapple with organic matter that hasn’t started to rot. In this sense, they are often thought of as secondary decomposers, as first fungi and bacteria have to break things down a little before earthworms can get involved.

Additionally, it’s generally fairly difficult for diseases to be transferred between animals and humans. Transfer generally has to occur through an exchange of bodily fluids, such as if you were bitten by a rabid dog.

As earthworms have no direct interest in eating us, they would need to transfer disease to us through a bite. Luckily, earthworms do not have teeth, and as their mouths are so small compared to the size of even our little toe, they would struggle even to gum us.

Beyond, all this disease transfer could occur if we were to eat an earthworm, however, the same is true if we were to eat any animal carrying a disease. This is why shop brought meat is tightly controlled, to ensure even our farm-raised animals do not end up making us ill.

What happens if you pick up a worm? 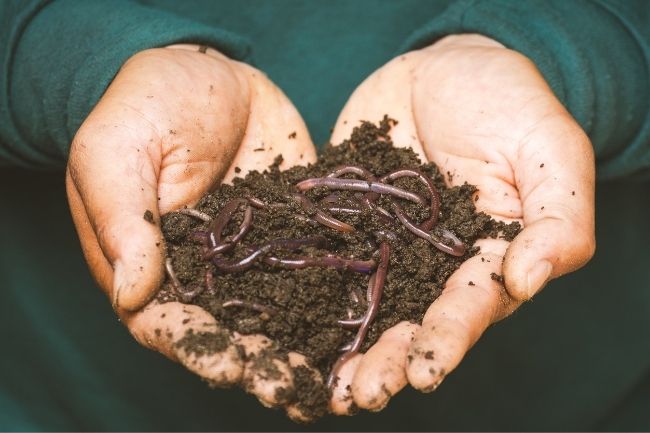 Just like if you shake a stranger’s hand, disease or illness is only likely to occur if that person has been touching something that would make you ill.

Most of the time, earthworms spend their days tunnelling through soil and plant debris. There are diseases that can affect us in the soil, such as tetanus, but in general, we do not worry a great deal if we have been out digging in the garden.

If the worm had been slithering through something more unpleasant, such as dog poo or rotting meat, there would be more of a risk, but for this to cause a potential health problem you would probably need to be fairly close to the original cause of the contamination, which would itself be a health risk.

You can always play safe by washing your hands after handling a worm, but in general, worms are more likely to get off worse from the situation, as the natural oils or manufactured skincare products we wear can be harmful to the worm’s skin, meaning it can be kinder to leave them where they are.

Also read: Here’s “What do Earthworms Need to Survive?”

Across the world, many people have eaten earthworms as a source of valuable protein. Today earthworms are being promoted even more as a food source as their carbon footprint is much lower than that of traditional meat.

Even more significant, they can be fed on our food waste, creating a circular food production system that would reduce emissions and waste all in one go.

Are earthworms dangerous to cats and dogs?

When it comes to who will come off worse between your pets and a worm, it is much more likely to be the worm. Many pets will choose to investigate a strange wiggling object, and can easily hurt the worm if you leave them unsupervised.

Therefore, it is much kinder to move the worm away from your pet and let it live its life in peace. However, even if your pet eats a worm, it’s unlikely to do them any harm.

While it is important to have a healthy respect for nature, and an understanding of those parts of it that are harmful to us, it’s also vital we do not fear everything that is not clean and controlled.

Studies have shown that overly sanitized houses can result in health conditions, and children that have access to dirt develop better immune systems. Worms are not the cleanest of creatures, but they don’t need to be.

And while worms may come with a bit of dirt attached, that doesn’t mean they are something to be reviled and feared. These wiggly little creatures do us a great deal more good than harm, and when it comes to who is scarier out of us and them, it’s definitely us, don’t you think?

Earthworm Poop – Its Benefits, How Does it Look Like & More
Next Post: Wondering if “Do Earthworms Hibernate?” – Surviving Winter