Due to their very different living environments, adult dragonflies and larvae have very different methods of breathing. Adults have a series of spiracles on their bodies, holes that allow oxygen to travel down into their cells. Nymphs, living underwater, use gills instead.

How do adult dragonflies breathe? 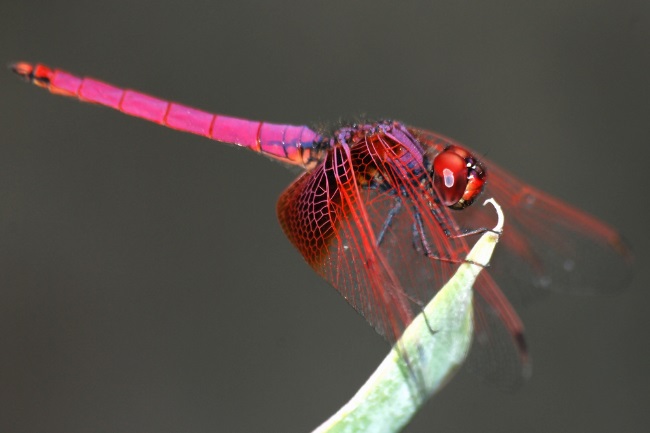 Though insects faces may appear very alien at first we soon realise that they aren’t so different from our own. Many have distinct heads, sporting two large eyes (though many smaller eyes may be present but less obvious) and a mouth. However, there is a feature that is missing; a nose.

Unlike humans, insects don’t need noses. Much of the sensory work that is usually carried out by the nose has been handed over to their antenna, as these appendages are able to pick up chemical signals, helping them to detect anything from romance to where to grab a bite to eat.

But of course, the more important function of a nose in mammals is to help bring oxygen to our lungs, allowing us to breathe. Here too many insects have a clever alternative. Rather than one big inlet on their faces, they have a series of smaller openings along with their bodies. These holes are known as spiracles.

The spiracles are small holes dotted down the abdomen of the dragonfly. These holes lead to a series of ever branching tubes, which deliver oxygen to the cells of the insect. In many ways, the system isn’t too dissimilar to our own lungs.

The major difference is that our lungs deliver oxygen into our blood, which circulates through our body delivering that oxygen to our cells. For insects, the delivery is far more direct, as their blood does not circulate as reliably as ours. As well as oxygen being pulled in carbon dioxide is released back out, just as it is when we breathe.

In many insects they can contract muscles around the openings of the spiracles in order to prevent the gas exchange from occurring, however when open oxygen is naturally drawn in, without the need for muscular action to pump it through the system.

Also read: When and How do Dragonflies Sleep? (Sleeping Habits)

How do dragonfly nymphs breathe? 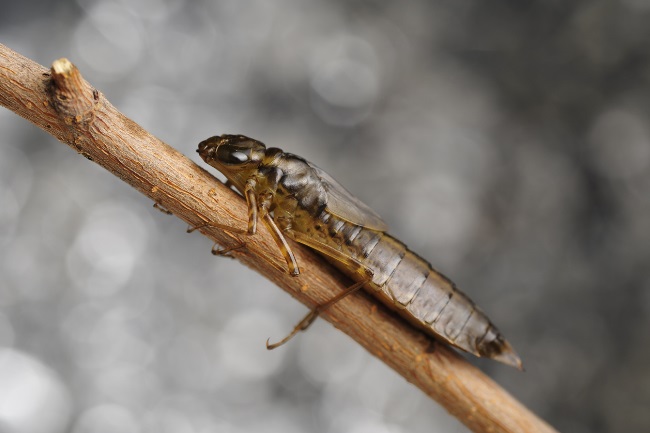 While adult dragonflies live above the water, where oxygen is all around them, dragonfly nymphs live below the water level, meaning extracting oxygen is a little more complicated for them. Some gas exchange still occurs through their exoskeleton, directly with the water surrounding them. Oxygen is pulled in, while carbon dioxide is released.

However, on top of this, the little nymphs have an even more exciting way of getting a breath of fresh air. Rather surprisingly it’s through their anus.

Just like fish, and many other aquatic organisms, dragonfly larvae breathe by using gills to absorb oxygen from the water around them. While we may be used to a fish’s gills being near their head, dragonfly larvae keep theirs in their anus.

In order to keep a fresh oxygen supply around their gills, they therefore need to pull water into their anus and expel it again. To help kill two birds with one stone they use this as a kind of jet propulsion, helping to take them full steam ahead through the water.

In many science fiction movies, we get to see giant insects flying through the air or crashing through the undergrowth after our hero or heroine of the hour. Yet, though some insects do reach surprisingly gigantic portions, we don’t get anything like as megalithic as we find within the fossil records.

Dragonflies are a classic example of this. They are one of the truly ancient insect groups, one which has been around since well before the dinosaurs. Luckily for us many of their ancient cousins are well preserved within the fossil record, their hard exoskeleton and their penchant for living near water, and soft sediments, making them perfect for preservation.

From these remains, we are able to see how the average size of our dragonflies has changed. Today the larger specimens reach around 20cm, with most species not reaching close to this impressive size. The largest fossil specimen, by comparison, is closer to 70cm, over three times the size of today’s giants.

So what changed? Why did dragonflies, like many other insects, get smaller? Well, there are many theories, however, a common one is to do with what these insects were breathing in. The availability of oxygen is a key constraint in how large insects can become.

As the levels of oxygen were much higher in the past, making up around 30% of the atmosphere 300 million years ago, compared to 20% today, insects were free to become giants.

It’s perhaps lucky for us that the levels dropped, as life would be very different with giant insects to contend with on a day-to-day basis.

Is a Dragonfly a Herbivore, Carnivore or Omnivore?
Next Post: What do Butterflies Eat and Drink? (Detailed Guide)