Bees fly by moving their wings rapidly through the use of internal muscles that contract their thorax. Although their wings are technically too small for their bodies, moving them quickly allows them still to take to the air.

How do a bee’s wings work?

There are around 20,000 different species of bees across the world. Though there are many variations between them, the basic body shape and design are largely the same. They have two sets of wings, both attached to their thorax.

The forewings and hindwings are zipped together to form one large wing surface. This is achieved through teeth-like nodules along the wings known as hamuli.

Famously, it has been said that the bumblebee’s wings are too small to allow it to fly. For a long time, scientists thought this was true even of smaller bee species. If we look at the size of wings in other species, such as butterflies and dragonflies, bee wings are surprisingly small. However, the flexibility of the wings, and rapid wing movements, help the bees to soar through the air.

They move their wings approximately 230 times a second, which is a high number for their size. It is the rapid movement of the wings that creates the buzzing sound that we associate with bees. The flexibility of the wing allows it to bend slightly as it is brought forwards and backwards, adding additional force to each movement.

In order to move their wings, they use the dorsoventral muscles and dorsal-longitudinal muscles, which stretch from top to bottom of the thorax and from back to front of their thorax.

It is thought that the design of the bees’ wings may help with when they are carrying cargo, such as pollen or in some cases leaves and petals.

As well as their rapid movements, another boost to a bee’s flight powers is the leading-edge vortices, which is the formation of a tiny tornado of air by the rotation of the leading edge of the bees wings. This is believed to give the bee extra lift and help make flight possible.

Like most insects, bees require external warmth to move. This means that they cannot remain active in the winter or on chilly days. This is why we only tend to see bees in the warmer months.

However, bees do generate some of their own heat through the friction of moving their wings, which is why they will often be seen flapping their wings prior to taking off, in order to warm themselves up enough to take to the air.

Can a bee’s wings grow back? 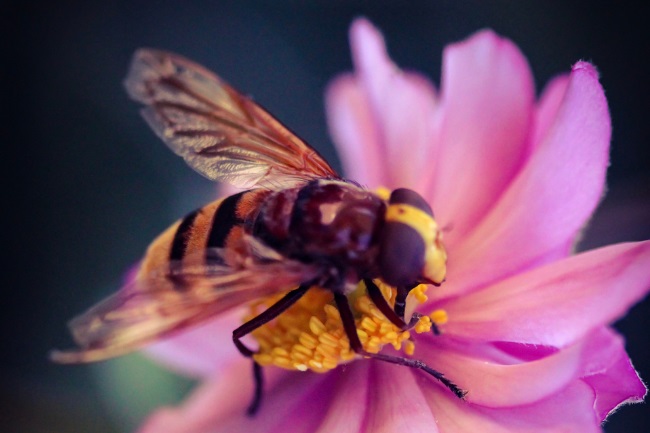 Bees’ wings are surprisingly strong and flexible, despite their delicate appearance. However, over time their wings can become damaged, either by weather conditions or by attacks from predators.

The bee’s wings are made of chitin, the same material our fingernails are made from. They are also covered in a series of veins, which are the dark lines you can see on a bee’s wings.

Damage can be in the form of small tears in the wings, or in more severe damage. Unfortunately, it isn’t possible for bees to grow new wings, or repair the damage that is done to them. However, bees are able to keep flying with small amounts of damage, though larger issues may mean that they can no longer fly.

Sad as it is there is little that can be done for a bee once its wings are too damaged to fly. As bees can fly with some damage though it’s best not to assume a bee isn’t flying because of a damaged wing, as it may simply be that they are too cold to fly, or ill.

What do bee’s use their wings for?

Flying is the main purpose of a bee’s wings. Taking to the air is largely something bee’s do in order to find food, however, they may also head out on other tasks, such as to find a nesting site, look for a mate, or even to dispose of other dead bees, a common task within a honey bee colony.

Drone honey bees will head out and fly around at traditional drone sites, in a large group. Here they will wait until a queen comes in search of a good time. She will then fly through the group, the fastest drones getting a chance to mate.

Another thing wings are useful for is for air temperature regulation. Honey bees in particular will line up at the entrance to the hive in order to waft their wings and therefore force cooler air into the hive. This is a very effective method of air conditioning.

Although not designed to carry pollen, bees will accidentally collect pollen in their wings and then clean this off with their legs in order to harvest it.

It’s hard to imagine the summer without the buzz of bees. We may once have thought this buzz was made by the bee’s mouth, it’s amazing to think it is the sound of the bee working as hard as it can to remain aloft.

While the bee may not be the more efficient flier, that doesn’t stop it from going about its business as if it knows exactly what it’s doing.

How do Butterflies Sleep? (All Questions Answered)
Next Post: Here’s “Why Bee is an Insect” (Explaining the Characteristics)