The vast majority of millipedes eat decomposing materials, such as rotting wood or plant matter. A small number of species also eat meat, such as insects. Most species will also eat their own faeces and their discarded exoskeleton after they have moulted.

How do millipedes eat and drink? 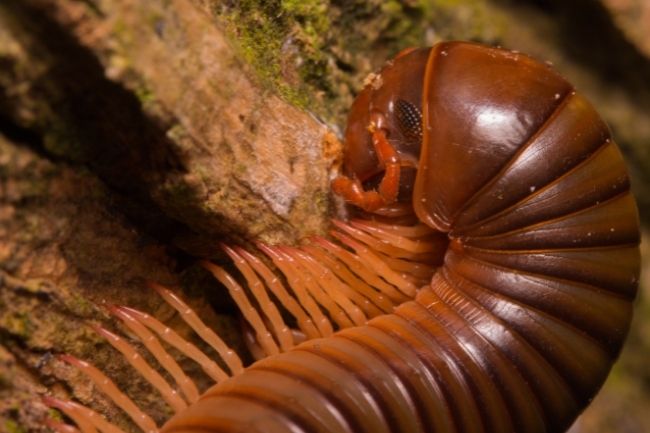 Millipedes have a mouth which is located on their head. In order to chew, they use their large mandibles to break pieces of their food to ingest. To further help this process, they have glands within their mouths that allow them to excrete a digestive liquid, softening their food.

Once broken off they swallow their chosen food, sending it down into their stomach, where enzymes and certain fungi, help them to further digest and process the plant matter they have eaten.

From the stomach, digested food will move into the millipede’s gut, where any additional moisture and nutrients will be extracted. Once processed, the waste will leave the millipede’s body via its anus, and be excreted as faeces.

As well as food waste, the millipede’s faeces will contain waste from their blood, which is collected from the animal’s blood and excreted.

Millipedes don’t drink a great deal, as their food tends to contain plenty of moisture. However, they may drink occasionally from raindrops, puddles or dew, if they come across it. Millipedes struggle to maintain their moisture levels and therefore tend to live in damp habitats to prevent themselves from drying out.

What do millipedes eat?

The majority of millipedes eat largely decaying matter. This may be either plant matter or decaying animal matter. They might eat rotting wood, fungi or even the waste of other animals. They are what is known as detritivores, and like worms, they are important for improving the soil and helping to release nutrients that otherwise would be trapped in rotting materials.

While they are often referred to as vegetarians, officially, millipedes are omnivores, as they will eat decomposing animals as well as plants.

As well as decaying matter, millipedes will eat their own faeces. This is thought to aid their digestion, and they have been found to lose weight when other food is available but not their own waste. It is thought that fungi present within the droppings is important for them to re-ingest.

Millipedes also tend to eat their own skin, once it has been moulted. It is thought this may help them to replenish important minerals.

A few species will eat living insects; however, this tends to be opportunistic feeding. Millipedes are often confused with centipedes, who are carnivorous, and speedy and vicious hunters. Millipedes are far more likely to eat slow-moving species like snails.

When do millipedes eat and drink?

Millipedes will eat almost constantly, although many species are more active at night. Some species may ‘hibernate’ during winter months, or enter aestivation during hot or dry periods. When in this state, they may eat very little.

Millipedes do drink water, however, like many arthropods, their food contains enough water that they usually do not need to seek out water to drink. More important to them is not to dry up, and to live within damp or humid environments, such as under rocks. However, they will drink water when it is present during dry periods.

What do baby millipedes eat? 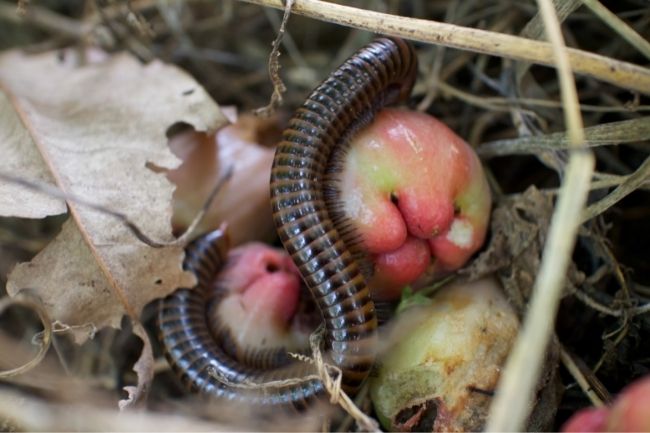 Most millipede species lay their eggs in the soil and then leave them to hatch alone. The social millipede does care for its young; however, this is very unusual behaviour. The female will sometimes create a case to protect the eggs using her own faeces.

Once the young emerge they have independence almost immediately and spend their time below the soil eating much the same food as the adults. For most species, this is rotting plant matter.

In order to help them properly digest their food it’s important they accumulate certain fungi and enzymes within their gut. It is thought they eat these as part of their feeding, and these can then thrive in their stomachs.

Millipedes do eat plants, but they don’t tend to eat living plant material. For this reason, they have not been considered a crop pest and actually can be highly beneficial as they eat rotting materials that could spread disease, and help improve the soil.

Some people may confuse millipedes with caterpillars, who do eat living plant material and are similarly shaped. Caterpillars are the juvenile form of butterflies and moths, whereas millipedes do not take on a different form as they develop.

Millipedes will eat apples and other fruit, though usually only when they have fallen to the ground and are rotting. Some people who keep millipedes as pets may cut up apples to feed to their millipedes.

Some millipede species may eat living insects, but most would only eat an ant if it was already dead. Far more likely is for the ant to eat the millipede, with some species ganging up on other arthropods like millipedes and eating them alive.

What do millipedes eat as a pet?

As pets, millipedes can eat much the same as a wild millipede, with owners introducing rotting plant materials to the enclosure within the substrate. Some owners like to add other foods such as watermelon, bananas and other fruits, or cat or dog food.

Though these foods may look very different to us from the millipedes usual fare, they are still simply plant and animal matter, that can start to rot if left in the millipede’s enclosure.

What do giant millipedes eat?

Like most millipedes, giant millipedes eat mostly decaying organic matter, such as dead plants and animals. They may also eat small insects.

Also read: Here’s How Big Millipedes Are – Around the World

The giant African millipede is the largest millipede species in the world, yet just as its smaller garden relatives, it tends to eat largely decaying plant matter.

What do garden millipedes eat?

Garden millipedes will eat the most decaying plant or animal matter they can find. They are very opportunistic feeders, and not particularly fussy.

What do pill millipedes eat?

What do millipedes eat in the UK?

The white-legged snake millipede is one of the UK’s most common species. Like most millipedes it lives largely off decaying plant matter, however, it will also eat fungi such as mildew.

What do millipedes eat in the US?

One of the largest species of millipedes in the US is the American giant millipede. Although a giant, it is still relatively gentle, eating largely decaying plant matter such as leaves, as well as fruit. The desert millipede is slightly more unusual with its diet, eating bacteria as a large part of its diet. It will also eat decaying plant matter and small pieces of sand.

What do millipedes eat in Africa?

The African giant millipedes are the most famous millipede to come out of Africa, in part because it is so often used as a pet. Like most millipedes, it eats largely decaying plant matter.

Millipedes are not fussy or careful eaters. Perhaps one of the reasons they have survived so long, is that they are opportunistic and go after food that is already dead, and therefore doesn’t need hunting down or killing.

Their food is also plentiful, with dead and decaying plant and animal remains being readily available in almost all habitats across the world. Their one potential difficulty could come in the form of the many animals that have decided that they are the tastiest snack available.

Yet, even with this millipedes have given themselves a helping hand, by spending most of their time hiding away, burrowing through the soil or sneaking through cracks and crevices. And if all else fails, they can exude an unpleasant-tasting chemical that will put off their would-be predator.

So while they might find everything they find to be equally tasty, those that take a bite out of them might not agree

Here’s “How do Millipedes Breathe?” (Explained)
Next Post: Can Millipedes go in Your Ear? (Is That Even Possible?)