Most butterflies spend the winter in diapause, a type of hibernation. This means they do not need to eat during this time. Butterflies will overwinter either as eggs, caterpillars, pupa or adults.

What do butterflies eat? 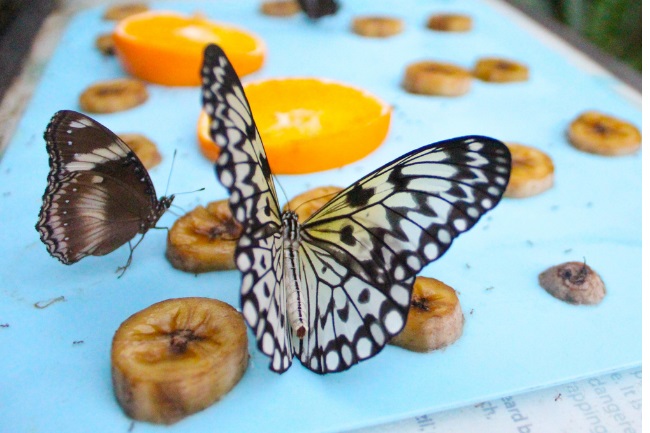 In general, adult butterflies eat largely nectar. This is a sugary liquid produced by flowers in order to bribe insects to visit them. Once the insects have sipped on the tasty nectar they will usually have become covered in pollen, which they will then carry over to other flowers, causing cross-pollination.

Butterflies also take advantage of some other sources of minerals and nutrients, such as animal faeces, rotting fruits and even dead animals, however, the vast majority spend their time travelling from bloom to bloom in order to feed on nectar.

Where did all the food go? 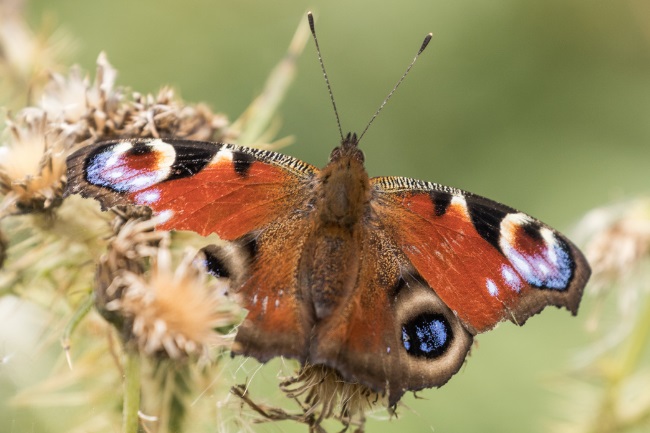 Most butterflies emerge into adulthood between early spring and mid-summer. This is an important time for them as it is when the majority of their food is readily available. Some butterflies will have two broods in one year, while others will only have the one.

Most synchronise their emergence with when their food will be available. For some butterflies, they are happy with whatever they can get their hands on, while others will specifically feed on one particular flower.

Come autumn food sources as beginning to get scarce, with many flowers being passed their best. Some new foods may become available with fruits forming and then rotting, but for most butterflies, it’s nectar they are in need of. As the temperatures drop further flowers become few and far between. This is when a butterflies survival strategy has to kick in to get it through the winter.

As invertebrates do not make their own heat for many insects the winter is too cold to stay active in. On top of this many food sources disappear. For butterflies, this means their flowers are all gone. How they get through the winter depends very much on what species of butterfly they are.

For some adult butterflies, all they get is one summer to flit around, enjoy the sunshine, and mate. Come the winter their days in the sun are over, and slowly they die away. For those that die, it’s not the end for their kind, as their young lives on, either as eggs, caterpillars or pupa.

The majority of butterflies overwinter as eggs or pupa, entering diapause, a state similar to hibernation, where they cease to develop. Neither eggs nor pupa needs to eat anything at this time, as they are dormant.

However, not all adult butterflies die off at the end of the summer. Some overwinter as adults. These butterflies spend the winter tucked away, also entering diapause. Often they will find a spot below the rotten bark of a tree or within an old shed. Species such as the mourning cloak butterfly, the peacock and the question mark, all spend winter as adults.

In order to survive this period they need to shelter from the worst of the cold, stay away from damp, and hide themselves away from predators. Hibernating butterflies make an excellent snack for mice, and other animals still active in the winter. In order to disguise themselves, these butterflies will often have camouflage colours and patterns on their outer wings, which looks rather like bark.

Some, like the peacock butterfly, go a step further, and have large eye-like markings on their wings. When threatened they simply open up their wings and make a loud hissing noise, making the hungry mouse think they are being stared down by an owl. This fright is enough to send them skittering away, saving the peacock butterfly’s life.

Whatever form butterflies spend the winter in, however, they do not require any food. This is the benefit of entering diapause, as it allows their bodily functions to slow down, helping them to get through the winter without needing to nourish themselves.

Also read: Why are Young Caterpillars Left to Look after Themselves?

There is an exception to this self-enforced fast. Butterflies are very sensitive to changes in temperature, as this is what awakes them from their diapause so they can resume their lifecycle in the spring. However, on unusually warm winter days they can become confused and emerge from their hiding places feeling very hungry.

This awakening can have a profound effect on butterfly populations as, if they can’t quickly get something to eat and head back to bed, they could use up their reserves and die. As the climate warms such unusual winter conditions seem to be becoming more common, causing a serious threat to overwintering butterflies.

Not all food is unavailable throughout the winter though, and even in the depths of winter there can be a few flowers blooming. However, it is down to luck whether the emerging butterflies will be able to find their sustenance in time.

What do Butterflies Eat and Drink? (Detailed Guide)
Next Post: Here’s How a Butterfly Flies When it Rains (Explained)