A ladybug bite looks like a small raised red spot. Ladybugs can bite human beings, but most do not have strong enough mandibles (jaws) to get through human skin. Although some of the larger species, particularly the harlequin ladybug (Harmonia axyridis), can potentially bite hard enough to leave a mark, most people will feel no ill effects.

Should we be scared of ladybugs? 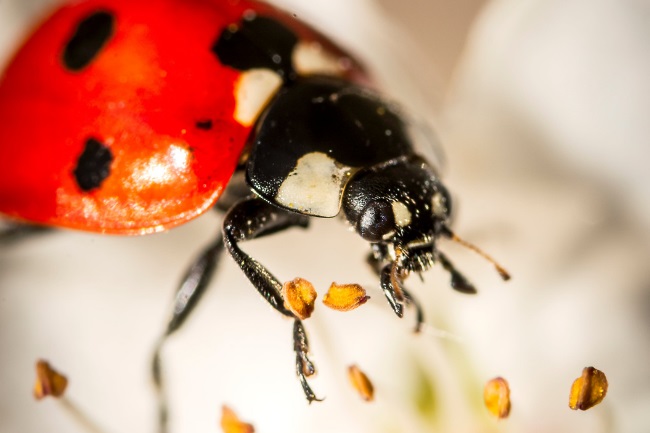 Insects have a bad reputation. In the press, in films and books, they are slimy and creepy, and worst of all, they sting and bite. Ladybugs too, are starting to get a reputation, with articles on terrifying attacks of killer red and black monsters. Yet is there any truth in these concerns? The first and most important thing to remember is that, like many insects, ladybugs are animals we want to encourage and protect. The benefit that ladybugs give us in terms of pest control is significant, and though they might sometimes cause us some problems, they are part of a vast and complex food web, which it is best to leave as unaltered as possible.

A bite or a sting?

Many people use the terms sting and bite interchangeably, yet they mean very different things. A bite is defined as a creature using its teeth or jaw to grip or wound another living or inanimate object. To sting by comparison means to prick or wound through the use of a sharpened or pointy organ, often injecting venom or poison. Bees, for example, can sting us with a modified ovipositor on their abdomen. This sting injects poison into our skin. By comparison, a rabbit will use its teeth to bite. However, some bites can involve the injection of venom, such as snakes. 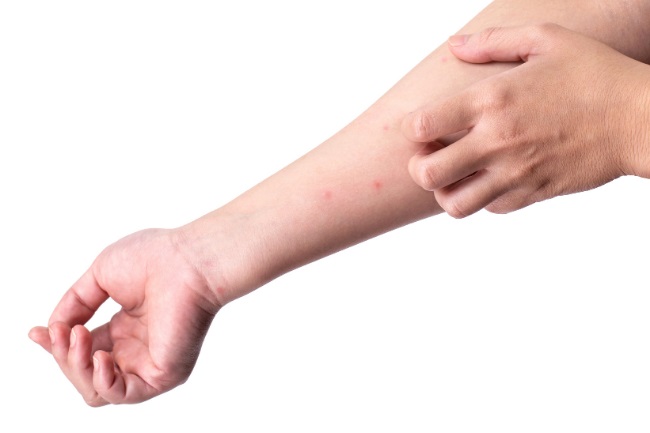 Ladybugs do not have a stinger. Instead, they use their mandibles to bite. Mandibles are a section of an insect’s mouthparts, which extend out from the mouth and are separately moveable. They are used to hold, cut or bite. Ladybugs use theirs to munch down on their favourite prey, usually aphids, whitefly or scale bugs. Some ladybugs are herbivorous (eating-plants), and many of them have adjusted mandibles, which they can more easily use to eat plant matter.

So given their anatomy, if a ladybug is going to do anything to a human, it will bite. However, a human is a lot bigger than the aphids the ladybug’s mandibles are designed to handle. Our skin is simply a lot thicker and more challenging to get through. The same is true for many spider species. When we hear that a tiny spider has a poisonous venom, we can often begin to panic, but if the spider can’t break our skin, it’s likely that its poison will have no effect whatsoever.

Many ladybug species have bright colouration, with the most famous being the seven-spot ladybug (Coccinella septempunctata) with its red elytra and black spots. Other ladybugs can be yellow or orange and have a combination of exciting patterns. These bright colours and patterns warn a potential predator that their lunch will pack a punch. However, Ladybugs do not have any way to inject their poison into the flesh of another animal. To ingest a ladybird’s poison, you would need to eat one, and for a human to be affected by that poison would involve eating over a hundred of the little insects.

A different kind of poison 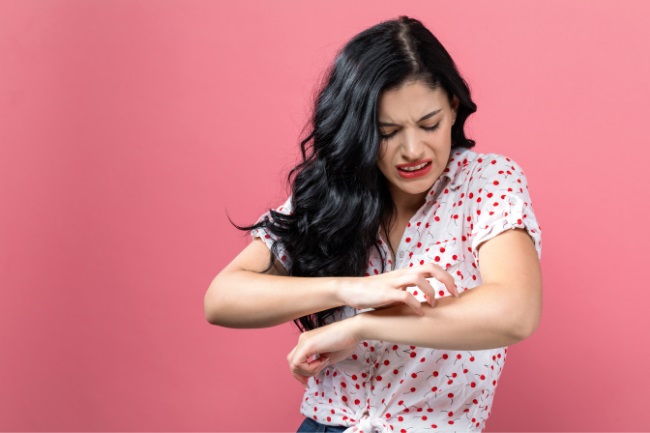 Although a ladybug cannot kill just anyone, it can cause severe discomfort and potential harm to those allergic to them. A ladybug allergy might not be something you’re used to hearing about, but it seems as if it is becoming more common. Most sufferers are allergic to the hemolymph, the ladybug’s blood, which they release from their legs as a response to stress. The orange liquid is foul-tasting and puts predators off. If accidentally rubbed into the eyes, it can cause conjunctivitis. An allergic reaction can also occur if this fluid is ingested or comes into contact with the skin, particularly on an open wound. Other symptoms can be hives and asthma.

Though most people are not allergic, some studies have found as many as 21% of people tested positive in some regions of the United States.

The harlequin ladybug, or Asian ladybug, seems to be the big problem causer. Firstly they are more aggressive than other species of ladybug s, and therefore more likely to bite. Secondly, they are larger than many ladybug species, so they are more likely to get through the surface of the skin. And finally, they can congregate in large numbers, which can be a big problem for allergy sufferers. Once native to Asia, they have since been introduced, or accidentally spread, to Europe and America. One of the reasons a ladybug allergy might be becoming more common might be that these ladybugs are cause increased contact between humans and themselves.

How to deal with ladybugs?

Again it is important to note that if you aren’t allergic to ladybugs, and they aren’t causing a problem, the best thing is to let them be. Ladybugs are largely not aggressive towards humans. Like many wild animals they turn to violence only when they feel threatened. This could be because you’ve accidentally leant on one, or it’s gotten trapped. Even if a ladybug lands on your skin it will mostly wander around for a bit before taking off again, without causing any harm. 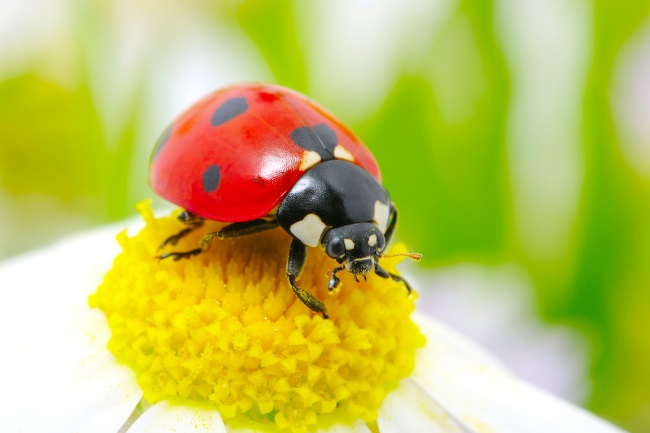 However, if you do have allergies you can take precautions by ensuring you minimise contact with ladybugs. The most common time to come into contact with them is when they are in their winter dormancy. Often congregating in houses they can become frightened if disturbed. The best thing is to ensure all gaps and crevices where they might enter the house are well sealed. And if you find any you can ask someone without an allergy to humanely remove them and take them to another location where they won’t be a problem. 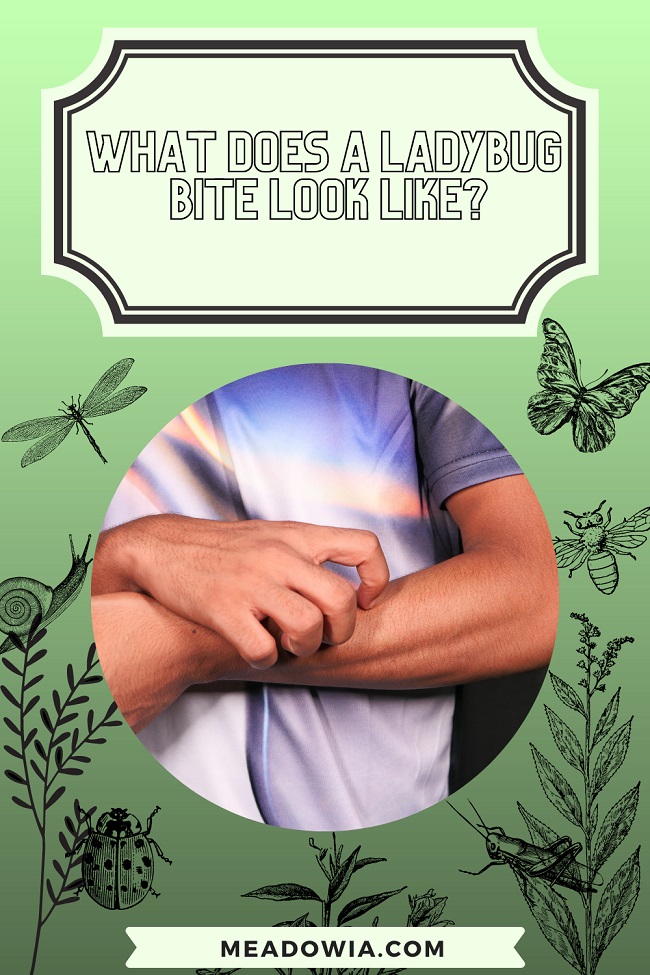 What to do if you’re bitten?

So you have been bitten by a ladybug, what now? If you have a serious allergy to these insects than of course the first port of call wll be to the doctors, however for many people they way are most get a small raised red lump. As with many insects these bite marks may not be an allergic reaction to the bite itself but to plant or fungus residue within the insects mouth. It can help to clean the area with soapy water to wash out any contaminants, and then if the itch persists an anti-histamine can help take down the swelling. If a serious reaction occurs, such as hives or shortness of breathe see a doctor straight away.

To look at a ladybug bite looks just like many insect bites, small raised red lumps. If you see a bite such as this on your skin but didn’t see it happen it’s best to think back to what kind of insects you might have been in contact with that day. If a ladybug landed on you it could be the culprit, however mosquitos, horseflies, and other more common biting insects, can inhabit the same areas of ladybugs, so think carefully before you blame them for your annoying itch.

Do Ladybugs Have Antennae? (The Ways They Can Use Them)
Next Post: What Ladybugs Are Poisonous? (Aposematism and Batesian Mimicry)