Garden spiders can bite, using their fangs and other mouthparts to do so. Though this bite is deadly to an insect, it only causes a small raised lump on a human.

Does a garden spider have teeth?

We tend to think of biting as involving the use of teeth, as with a dog bite; however, animals that don’t have teeth can also bite. Spiders do not have teeth as we think of them; instead, they have chelicerae. Chelicerae are the mouthparts of a group of arthropods known as Chelicerata. This group is composed of arachnids, such as spiders, scorpions and ticks, as well as horseshoe crabs and sea spiders. 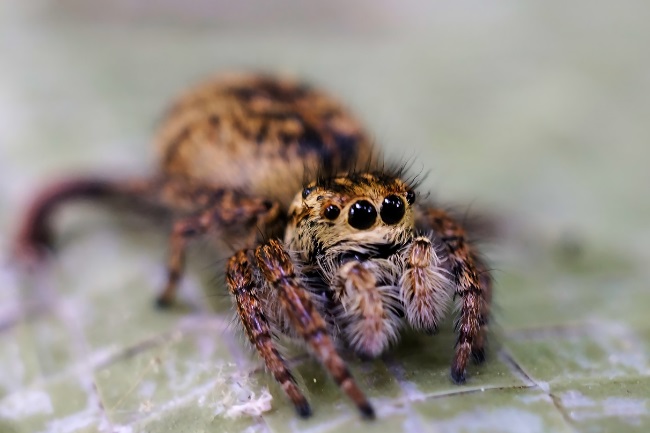 Chelicerae are the jaw parts of this group. Within spiders, these are made up for a basal section and then the spider’s fangs. The fangs are retractable, folding away like a flick-knife. Spiders can be classed into two groups by the orientation of their fangs. The orthognaths have fangs that are orientated along their body, so from their head pointing down towards the spider’s tail, so to speak.

The labidognaths have fangs that point towards each other, crossing over like scissors. The majority of spiders are labidognaths, whilst the orthognath group includes tarantulas and trap door spiders.Being a labidognath, garden spiders have these crossed over fangs. As well as folding away when not in use these fangs have serrated edges, also known as teeth, on either side of the pincher.

With this flexibility and additional grip, many spiders use their fangs as simplified hands, helping them to grip and manipulate objects, trap door spiders even using them to dig with. This innovative design allows these spiders to use their fangs to chew up their prey.

Eating with their legs 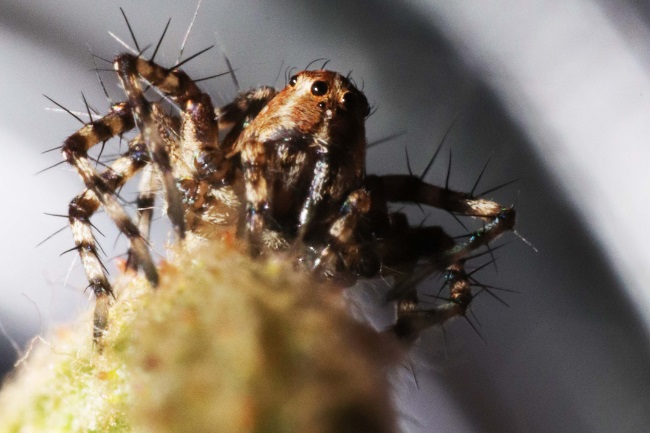 Along with the chelicerae, a spider’s mouthparts include modified legs known as pedipalps. These are located by the mouth and are smaller versions of a spider’s legs, excluding the lowest segment. They are used in many different ways by different spider species, but most notably as a sensory organ. In male spiders, the final segment is also altered to be used during courtship and mating.

As well as using their pedipalps to grip their prey, they use the top segment, known as the maxilla, to help chew their food. The maxilla is covered in fine teeth and hairs, and they can use it to help sieve their food or even to bite a hole in the skin of whatever they are feeding on.

Although spiders do have some ability to break down their food, they cannot eat solid prey the way that most mammals do. Instead, they require a liquid meal, which they can slurp down. Different spider species have different methods of catching their prey. Some species are ambush predators, such as jumping spiders. These tend to eat their prey by using their fangs to chew up the insects into a tasty pulp. Orb-weaver spiders, however, have their elaborate webs to allow them to catch prey.

Once the prey has landed on the web, they move forward to bite it with their fangs. The fangs themselves are hollow, with a hole in the tip allowing the venom to be inserted into the victim. The first bite will simply be to paralyse the victim as a wasps sting, or other insect appendages might injure the spider.

Once the prey is paralysed the spider then wraps it in silk before biting it again to deliver another short of venom. This venom is a different concoction, as the spider is internally able to mix up different poisons for different tasks. Once the prey is liquidised, the spider will suck the fluid down, using the maxilla as a filter.

Can a garden spider bite a human?

Garden spiders are relatively small creatures, with the larger female reaching a maximum of 20m (787in). Additionally, their venom is not powerful enough to have any significant effect on a human. Therefore, they have little incentive to bite aside from self-preservation. However, as with many creatures when faced with a predator, a spider’s first instinct isn’t to attack but to dissuade. In fact, if threatened in its web, the garden spider has been known to vibrate, moving rapidly to make itself appear larger and more threatening.

If this hasn’t been enough to discourage you from attempting to get up close and personal with our garden spider, then even handling one of these creatures might not elicit a bite. Garden spiders are generally very docile. If one were to bite, they would most likely use their fangs to give you a warning nip. It is thought to be less than a bee sting in pain and will cause a small raised red bump.

Also read: How Big Can a Garden Spider Get? (Female vs. Male)

So the answer is that garden spiders can and do bite. During their feeding process, they bite many times for many different reasons. Once to paralyse, once to liquefy and once to suck up the contents. For a fly, a grasshopper, or a beetle, these bites add insult to injury, leading all the way from fully functioning insects to inanimate mush. However, for a human, a bite will generally be more of a defensive attack from a tiny creature desperate to escape the terrifying predator above it. This bite might be a little painful but will lead to no more than an annoying itch. All being well, both you and the spider will live to bite another day.

How Big Can a Garden Spider Get? (Female vs. Male)
Next Post: What Eats Garden Spiders? (Most Common Predators)