Ants do not have teeth, instead they have mandibles. If an ant feels threatened, or you are close to a nest, they may use their mandibles to nip. Many ant species also have stings.

Do ants bite or sting? 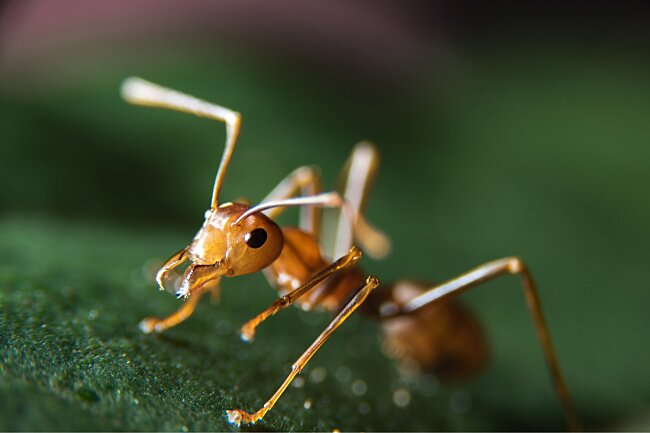 When you feel a sudden pain and realize a small insect is causing it, the instinctive reaction isn’t to ask if you’re being bitten or stung, but simply to get rid of the attacker. Yet, it is important to know which end of an ant has attacked you, as they can produce very different reactions.

When it comes to ants, the bad news is they can both sting and bite. Biting in ants is carried out through the use of their mandibles. Mandibles are their large jaws, which they can use to clamp down on skin and effectively pinch it.

Different species have different sized mandibles, meaning an ant bite can be more or less painful depending on who is doing the biting. Ants do not have teeth to bite with, or fangs, and therefore they do not administer any kinds of venom in their bites.

At the other end of the ant is their sting. An ant stinger is very much like that of a bee. It is composed of three parts, two lancets and a stylet. The stylet sits in the middle, while the two lancets sit either side.

Depending on the species, the lancets can be smooth and straight, or they can be barbed. When an ant stings its target, the lancets move independently of the stylet and help to pull the stylet further into the skin.

There is a hollow centre to the whole structure, which is how the venom is injected into the animal. The venom of an ant varies between species, meaning that some species have a much more painful sting than others.

The hollow stinger is attached to a venom sack, which pumps the venom through the stinger when required.

While few people are likely to react to an ant bite, the venom within a sting will cause an uncomfortable reaction, usually in the form of raised lumps, itching or pain. Some people may also get an allergic reaction to ant stings, which can vary in severity.

Which ant bites/stings hurt the most?

When it comes to ant bites, you can generally go on the size of the ant as to how painful the bite will be. Larger species have larger, and typically stronger, jaws, meaning that a nip from them will hurt more and can be more likely to break the skin. There may be some discrepancy depending on what the ant is evolved to eat, as some larger species may have smaller jaws if they are designed to feed on easier to subdue prey.

When it comes to stings, things get more complicated. Around 70% of ant species carry a sting. Within these species, it is only the females that have stingers. This may sound like it tips the likelihood of not being stung in your favour, however, it’s important to keep in mind that the vast majority of ants within an ant colony are female.

All workers and queens are female, while only the drone are male. Drones are also generally short-lived as they are produced by the queen usually at one particularly time in the year, and they only live a few weeks at most.

Those species with acidopore’s may also be species less adapted to hunting, and may often use the acidopore more as a method of defence than a weapon to attack with. An acidopore is a small hole in the abdomen of the ant. They use this hole to spray their venom at attackers rather than inject them. 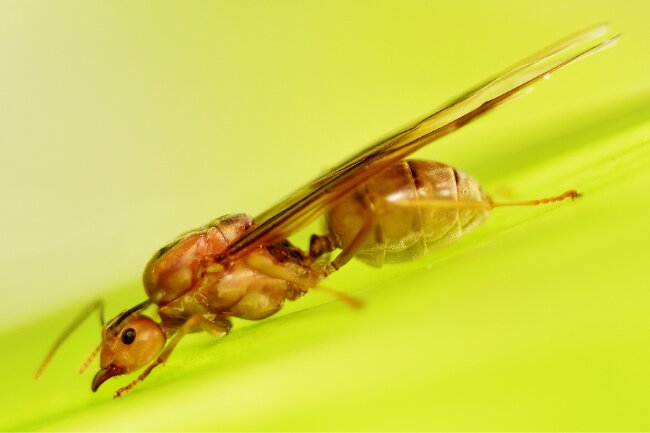 This sprayed venom is typically composed of formic acid. This can either be sprayed directly onto the skin of their attacker, or they may bite the attacker first to create a wound to spray the acid into.

Another interesting evolution comes in the Crematogaster ant species. These have a sting that doesn’t end in a point, but instead in a kind of spatula. In many species, the sting is also soft and flexible. These ants do not sting their prey, but instead wipe their poison on them as a kind of slurry.

All in all, these many different methods can produce vastly different reactions. Famously, the worst ant sting in the world is that of the bullet ant, so called because it is said to feel like being shot.

Other ants that are well-known for their painful stings include Fire ants. These tropical ants can cause severe reactions when they sting in numbers, causing vomiting and difficulty breathing.

Also read: Wondering “How Many Ants are in a Colony?” (FAQ)

Why do ants attack?

The good news when it comes to ants is that they generally do not want to attack us. Humans are too big to be seen as potential prey, meaning their only reason to attack us is if they feel threatened.

In general, an ant will see you as a threat if you are near their nest, or attempting to harm them. Common reasons why people are stung or bitten is because they have accidentally damaged a nest, for example, while gardening, or they have trodden on it while out walking.

If such an accident does occur, the best thing is to get as far away from the nest as possible, to allow the ants to calm down. If severe stings do occur, then it may be necessary to see a doctor.

How do flying ants bite?

Flying ants are the sexual generation of the ant colony. These tend to emerge in large numbers on a few occasions across the summer. They are made up of drones, male ants, and young queens, that are female. The drones do not have stings but do have mandibles, while the queens have both stings and mandibles.

Ants will bite any animal that they feel will threaten them, particularly around their nests. Dogs can get into trouble with ants because of their natural curiosity and love of digging. Most dogs will quickly learn to leave ants alone if they are bitten or stung.

Just like dogs, ants will happily bite or sting cats if they are threatening them. Cats are naturally curious like dogs, but less inclined to dig than dogs, meaning there is less chance of them disturbing a nest.

Wondering “How Many Ants are in a Colony?” (FAQ)
Next Post: Ants Breathing Explained… How do Spiracles Work?