The majority of ant drones and queens have wings during their initial reproductive phase. They leave their nests to mate, and then the female goes on to ground a new the colony. The male will not survive long after mating, and the female will lose her wings when she starts her colony.

What ants have wings?

If you’ve ever experienced a swarm of flying ants, you’d be excused for thinking they look something like out of an old horror movie. For many people, insects are something to be feared and reviled, particularly when they turn up in large numbers.

Newspapers will sometimes print exaggerated headlines about the ‘invasion’ of flying ants, stating the numbers have suddenly exploded. However, the swarming of winged individuals is in fact just a natural part of an ant’s lifecycle.

The winged ants that so many people get up in arms about are in fact just the same old ants that spend their time pootling through the grass in our gardens or gathering around a dropped ice cream on the pavement.

Also read: If You Wonder “Do Ants Have Bones?” (Exoskeletons Explained)

Which ants in a nest have wings?

The majority of ant colonies have one queen, though there are some exceptions to this. She is larger than the other ants and morphologically different.

She doesn’t leave the nest, and instead spends her time producing young. The young start life as an egg, and later hatch into a larva. Both eggs and larvae are cared for and in time fed by adult workers.

The majority of the larvae will grow up female and become workers. These workers are not able to reproduce, though in some species they can gain this ability if the queen dies and needs to be replaced.

Some larvae however will hatch out to be a queen. In most species, the workers won’t tolerate more than one queen in the nest and can kill queens if they stay. These young queens, therefore, need to head out into the world to start a new nest.

As well as creating young queens, the current royal will produce some males. Overall, males make up a very small percentage of the colony, the majority being female workers.

These sexually mature males, known as drones, and queens, are born with wings. This is to better allow them to disperse and find members of the opposite sex from other colonies. Ants can have quite large territories, and will often destroy other nests they find close to their own, meaning females need to get a good distance away to set up shop.

Dispersal of these flying ants is usually in warm, calm weather. People long believed there was a flying ant day when all the ants emerged at once, but it now appears to be a series of days over several weeks.

Known as nuptial flights, this is where males and females will head to swarming locations to find and mate with the opposite sex. In many species, the winged individuals will head to high up locations to gather and mate, this is known as ‘hilltopping’.

Post-copulation, males will only survive a few days before dying. Females, however, can go on to live for 15 years. That is, if they avoid being eaten by the many predators that take advantage of the glut of tasty ant protein. It is for this reason that the ants emerge on mass so that some can survive.

The females will fly off to find a suitable nesting site. Once she has found it she will snip off her own wings, as they are no longer useful to her, and dig into the ground to start producing young. She will remain in the nest, producing young until she dies.

Do all queen ants have wings?

The majority of ant species have winged drones and queens, however, some ant species only have wings in males. The females are known as ergatoid queens, and they do not develop wings.

This is common in larger species. Within these species the colony spreads by fission, which is where a new queen will take a number of workers and founds a new colony.

Unusually, both drones and young queens live a significantly longer time within their parent nest in many species. Not all colonies with ergatoid queens accept the presence of more than one queen, though, some still kill off additional monarchs.

Army ants are an example of this alternative method of dispersal, showing that not all queens need their wings to be successful.

How do their wings function 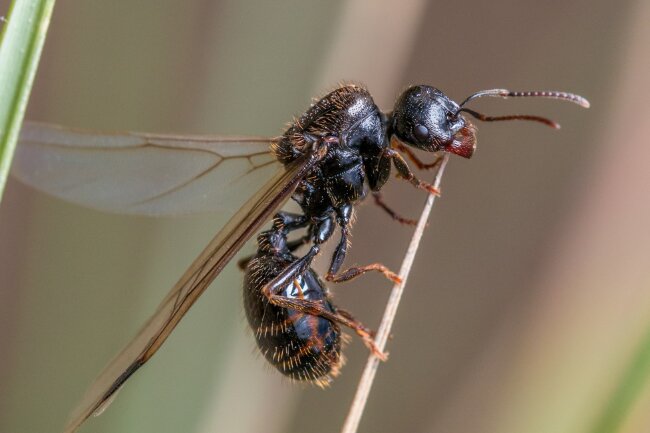 Ants are not great fliers compared to some species. They have two sets of long thin wings, which sit flat against their backs when they aren’t using them.

The wings are made of chitins, the same material our fingernails are made from. The two sets of wings are differing lengths, with a smaller set and a longer set.

Dark veins can be seen across the wings, taking blood to where it is needed. Male and female flying ants are of different sizes, with the queens being much larger.

Rapid wing movements help these insects to fly, but they aren’t strong enough to help propel these insects through strong winds, perhaps why flying ants seem to emerge only on still days.

How do ants get wings?

The drone and queen ants are born with wings, one of the things that distinguish them from worker ants. Males come from unfertilised eggs, however, females, which come from fertilised eggs can either become queens or workers.

How a queen is selected isn’t entirely understood, and seems to vary between species. In many, the queen is different from birth, without any clear distinction being made between her and the other workers in how they are raised.

In other species, the queen can be selected from among the workers, and post-selection she will change, gaining the ability to produce young.

How far can ants fly?

There is little research on how far flying ants travel to find their mates, however, it seems unlikely that they would travel far. It is thought that females can travel further than males as they need to find a new territory for their nest.

What happens if their wings are damaged? 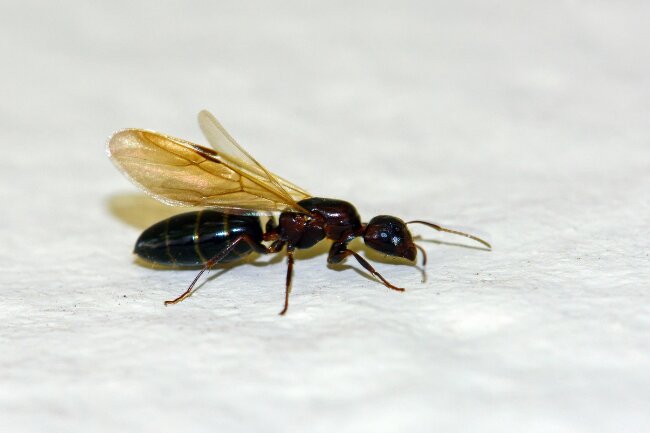 It’s not unusual to spot flying ants running along the floor with damaged wings. Their wings are fairly flimsy compared to those of some flying insects.

Damage can occur when attacked by a predator or if weather conditions are poor. For the males, the only use for their wings is to transport them to females and mate. They only survive a few days after this point, and their wings have therefore served their purpose.

For females the wings allow her to reach the males, mate and then disperse to start her own nest. After this, she will remove them herself as they serve no further purpose.

If the wings are damaged before she disperses she can walk some way but will probably be forced to make her home somewhere close.

Unfortunately, many aletes do die before they have a chance to complete their mission. This can be through the actions of predators or simple misfortune such as falling into water or getting stuck to discarded litter.

Do ants with wings bite?

Many people worry about the potential for these winged ants to cause harm, particularly if they end up invading their house.

All ants can theoretically bite, as they have mandibles to help pick up and shred food. For many species, these mandibles are too small to cause much, if any, discomfort to humans. Some ants can cause pain with their bites, or even their stings.

Largely, these defence mechanisms are used when a threat is perceived, such as if a person accidentally stands on a nest or digs up a colony. Flying ants in particular aren’t very aggressive as they have only one thing on their mind, successfully finding a mate and grounding a colony.

Ants do however produce formic acid as a defence. It doesn’t harm humans, but birds have sometimes been found to act strangely when they have eaten too many ants, due to the formic acid they have ingested. It will not cause them long-term damage, however.

Often flying ants can frighten people because they may accidentally land on their skin, however, if this occurs they can gently be blown or brushed off without much chance that they will attempt to bite or cause harm.

What colour are ants’ wings?

Because flying ants are simply the aletes of a species, this means that they come in many different sizes and colours. Some species, however, are more noticeable than others when they leave the nest.

In the UK, the common black ant is a species that is seen most regularly, perhaps because of its size and dark colour and the fact it tends to gather in the open.

One thing that often trips people up is mistaking other flying insects for ants, in particular termites. Termites are very similar to ants in a lot of ways. They live in a nest, with a queen and many workers.

Like ants, they have a reproductive caste who are the only ones with wings, leaving the nests to become kings and queens of new colonies.

Termites look very similar to ants and often were confused with ants historically. One common way to tell the difference between the winged generation of ants and termites is that ants largely have dark brown or black tinted wings, while the wings of termites are clear.

Sometimes the reflection of light can make the wings of either insect appear white, however, on closer inspection of can be seen that they are largely transparent with some tinted colour if it is present.

The hidden world in the open

Insects are all around us and outnumber us and all other animals. However, a lot of the time they are hidden away, underground, within dead wood, or underwater.

It’s often only during the mating process that we might get to see them, as they emerge in large numbers in order to outwit their predators. While we tend to term this as an ‘invasion’ these animals have always been there, we are simply only now taking notice.

It’s important that we show some tolerance and respect for these insect gatherings. While they may be slightly inconvenient at times they ensure the ongoing survival of the species, a species that is a significant part of our world, frequently performing jobs we unknowingly rely upon.