Millipedes do not have a many means of protecting themselves, as they do not have venom or stings. In general, they protect themselves by hiding away, and remaining out of sight. If attacked, many species can also produce an unpleasant tasting chemical that they exude from special pores along their body.

How does a millipede protect itself?

Millipedes have a large number of different predators that will happily munch down on them if given the opportunity. The majority of these predators don’t have millipedes as their main food source, simply adding them to their list of invertebrates they feed on.

Many insectivorous animals will eat millipedes, from badgers to hedgehogs, and even monkeys. Reptiles and amphibians such as lizards and toads will also happily eat millipedes as part of their diet. Even smaller animals like ants will hunt and kill millipedes if they have the opportunity.

With so many animals out to eat these little creatures, how can they possibly keep themselves safe? Animals have evolved a number of methods to defend themselves from being eaten, however, the millipede only makes use of some of these well known tactics.

Do millipedes have stings?

Stings are a great tool both to defend from attackers, and to use to hunt. Stings are usually sharp, hollow appendages that allow the animal to administer venom into the body of another creature. Bees and wasps are some of the most famous sting-wielding animals, but other sting-bearing species include stingrays and platypuses.

Unfortunately for millipedes, they do not posses stings, though they are often confused with centipedes that can sting. Centipedes use modified legs to administer venom, both as a form of defence and in order to hunt.

Millipedes are mostly detritivores, meaning they eat composting material such as rotting wood or plant matter. Most are omnivores, meaning they will also eat meat, such as dead insects. Because they do not need to chase down or kill their food, millipedes don’t have large teeth or fangs.

Instead, millipedes have small mouths, allowing them to chomp down on their food. They also exude a digestive fluid from glands in their mouths to help break down the food they want to eat.

The majority of species therefore do not have a large enough mouth or strong enough bite to cause significant damage to an animal that is attacking them. In most cases millipedes won’t even try to bite their opponent.

Also read:
Here’s How Big Millipedes Are – Around the World
Millipedes: Do They Sting or Bite? (Explained)

One of the main defence mechanisms most millipedes possess is the ability to exude a cocktail of unpleasant chemicals if they are attacked. These chemicals generally smell and taste foul, meaning that attacking predators are more likely to leave them alone.

In some species these chemicals can contain deadly poisons such as cyanide, which can kill the animal attempting to eat them.

Some predators have learnt to use these chemicals to their advantage however, with lemurs having been observed rubbing millipedes on their fur in order to coat themselves in the chemicals they release. These chemicals have been found to act as an insect repellent.

Millipedes exude the chemical mixture from pores that are located along their body. Some species are even brightly coloured to warn predators that they are poisonous.

The number one way that millipedes defend themselves, however, is by remaining hidden. Millipedes keep out of sight of predators by spending much of their time underneath rocks and logs, or burrowing through soil.

Most species are also dark in colour, in various shades of browns, greys and blacks. These colours help them to blend in to the darkness and hide against the materials they spend much of their time in.

Another common camouflage is for them to have slightly lighter or darker patches on their exoskeleton, helping to break up their form and allowing them to blend in to the background more.

They are also adapted to avoid the light, scurrying away as quickly as possible when sensing an increase in brightness. 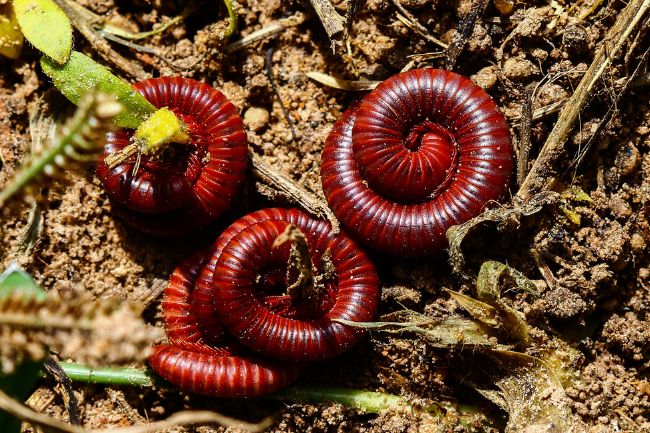 The millipede’s final form of defence is simple to curl up into a ball. Not all millipedes are capable of this action, but many use it to help protect their legs and softer belly from attack. On its own this defensive posture can protect them from small attackers, and give them time to put off larger predators with the release of their chemical warfare.

The fact is that millipede’s are gentle creatures, who have very little in the way if self defence. Most of the time they rely on not being found, rather than having to fight to survive.

Like many detritivores, their lives are relatively quiet hidden away amongst the leaf litter, or under rocks and rotting logs. They aren’t interested in hunting down prey or dicing with death. All our little millipedes want is to be left alone with a good old pile of rubbish to slowly work their way through.